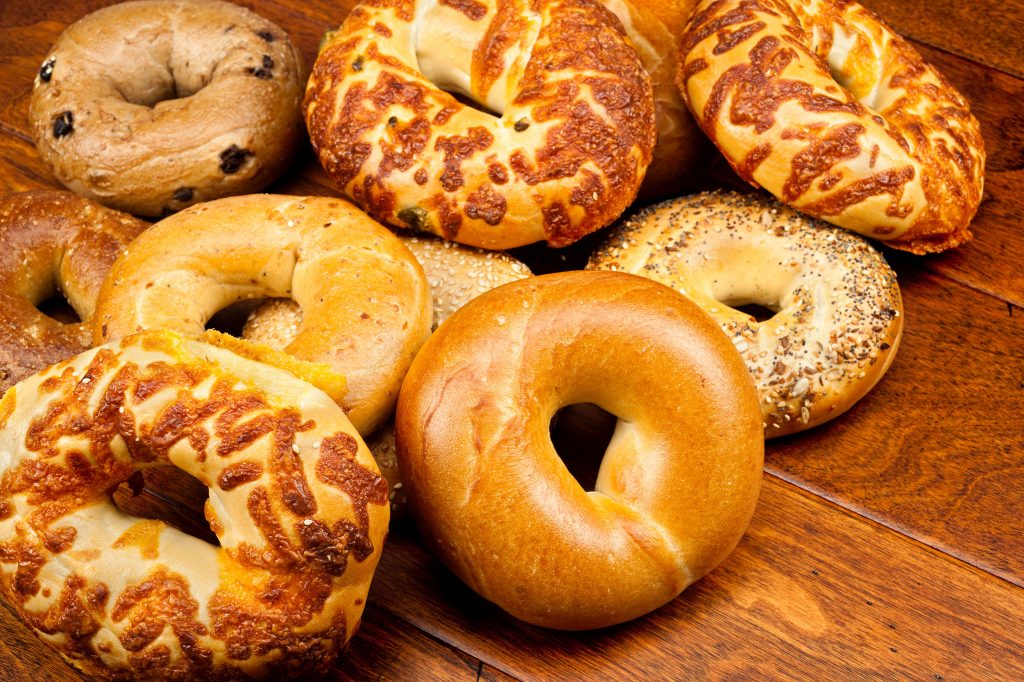 Bagels – there’s something immensely satisfying about biting into a chewy, doughy bagel, or popping one in the toaster for a crunchy and satisfying snack, which is why we weren’t surprised to find out that there’s a whole day dedicated to their deliciousness.

Bagel Day pays homage to this dense and delectable bread, celebrating the diverse range of bagels now available and the history of a type of bread that is over 600 years old! Salmon, cream cheese, salad, peanut butter, banana, and chocolate spread – there are thousands of possible toppings that you can put on a bagel to take it from day to night, breakfast to lunch and a snack to dinner but one thing must always stay the same – the bagel must be round.

If you’ve got a bagel in the freezer or the cupboard already then take five minutes to make yourself a bagel snack with which to enjoy the rest of this post.

The exact date that Bagel Day began is a little hazy, but it’s generally agreed that the day was first celebrated somewhere towards the beginning of the early 2000s. Although Bagel Day may have only been around since the turn of the Millenium, bagels themselves have been around for many years, more than 600 to be exact.

That’s right, bagels aren’t a modern bread product, they’ve been around since the 14th century and were first recorded as being handed out to women who had just undergone childbirth in Poland (definitely one of the tastier push presents you could be given).

From the 16th Century onward bagels became a staple bread product in the Slavic diet, eventually heading to Europe and the United States in the 19th Century. But even then, bagels struggled to reach the mainstream market because they were often hand made in small batches and were typically only found in niche Jewish stores.

It wasn’t until the 1970’s when ‘ethnic’ food became more popular, that the rest of the country realized what they’d been missing and bagels hit the big time. It may have taken almost 500 years for bagels to leave Poland and to travel to the US and Europe but it only took 10 year’s for them to become a mass-produced product and when Lender’s Bagels began marketing their frozen pre-sliced bagels to customers through TV and magazine advertising they took off as a household staple.

Today, Lender’s Bagels are now owned by Kraft, the vast majority of bagels are made by machines, not by hand, and bagels are a multi-billion dollar industry enjoyed by both young and old for breakfast, lunch and even for dinner. Who knows where bagels could be in ten year’s time!