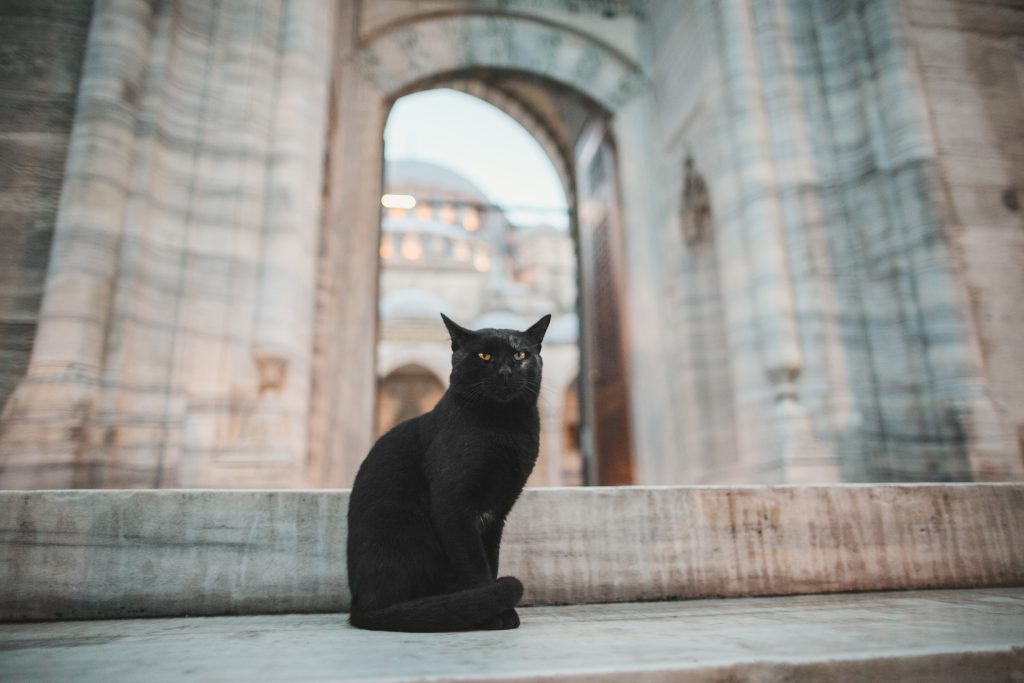 Because of superstitious beliefs in some cultures, black cats are sometimes associated with bad luck and, sadly, are more likely to be put to sleep or wait a long time to be adopted from shelters. Black Cat Day was launched to show people that a black cat could be the perfect cat for them, and help raise awareness about black cats in general.

If you’ve been looking for a rescue cat yourself, why not consider a black cat? Not only are the superstitions about them bringing bad luck completely untrue, but you might find a black cat to be a fantastic feline companion for you! On Black Cat Day, a fun way to celebrate, if you own a black cat, is to take photos with your pet to share and spread awareness about the day on social media. Children can join in by drawing pictures of black cats.

A lot of people think that black cats are associated with bad luck. If you see a black cat, do you walk away from it? For a lot of historical settings and cultures, black cats were actually related to positive things. However, it seems that this myth about them bringing bad luck is the one that has stuck the most. That is why Black Cat Day is so important. It is all about dispelling this myth and appreciating how great black cats are.

Black cats are loyal companions, and they have been seen in pop culture over recent years. We have Luna, the classic cartoon black cat, which features in Sailor Moon, as well as Salem, which is the black cat from Sabrina, the Teenage Witch – a show that we’re sure many of you watched when you were younger! We can’t forget about Hocus Pocus and the brilliant, sarcastic Thackery Binx either. Black cats are great, and they have so much personality, which is why we need to promote everything that is good about them rather than allowing this negative black cat spin to keep rolling.

It’s worth pointing out that there are a lot of myths and superstitions regarding black cats, and many of them are actually positive. For example, in sailing lore, having a black kitten on a ship is said to calm both the sea and the wind. In England, if a Black Cat visits your hotel, B&B, or inn, you are encouraged to welcome the cat nicely, as he will bring more patrons. There are some other superstitions in England regarding black cats as well, for example, if a black cat walks in front of you, he is said to take your troubles with him. Also, a pudgy black cat is believed to be a charm for a great marriage.

In Scotland, it is believed that placing black kittens on your porch will attract positive events and allay misfortune. In Early America, they believed that black cats had magical powers in their bones, which attracted power and good fortune.

Black cats are also very symbolic. Rather than being associated with bad luck, they actually symbolize understanding that there is no such thing as bad luck. They are also associated with strength, sensuality, elegance, supporting and advocating adoption, beating the odds, and standing up against prejudice. So, as you can see, black cats are very powerful creatures, which send a positive message to people. This is why black cat gifts, including jewelry charm bracelets and artwork, have become so popular with people who are looking to send positive and uplifting messages to their loved ones.

Black Cat Day was created in 2011 by Cats Protection in order to celebrate beautiful black cats. When the campaign was first launched, it was revealed that it took black cats an average of a week longer to find a home when compared with other colored cats. Because of this, the campaign was set-up to celebrate black cats and to help promote them as beautiful pets that deserve as much love and attention as other cats.

In order to understand a bit more about Black Cat Day and why it is so important, we need to look at the history of black cats in terms of them being viewed as bad luck bringers! This can largely be linked to the Middle Ages whereby people, especially those in the Catholic Church, believed that witches were shape-shifting black cats. Ever since then, the damage has been done. So, if you are truly to believe that black cats bring bad luck, then you need to believe that they are witches as well, and we can assure you that this probably isn’t true!