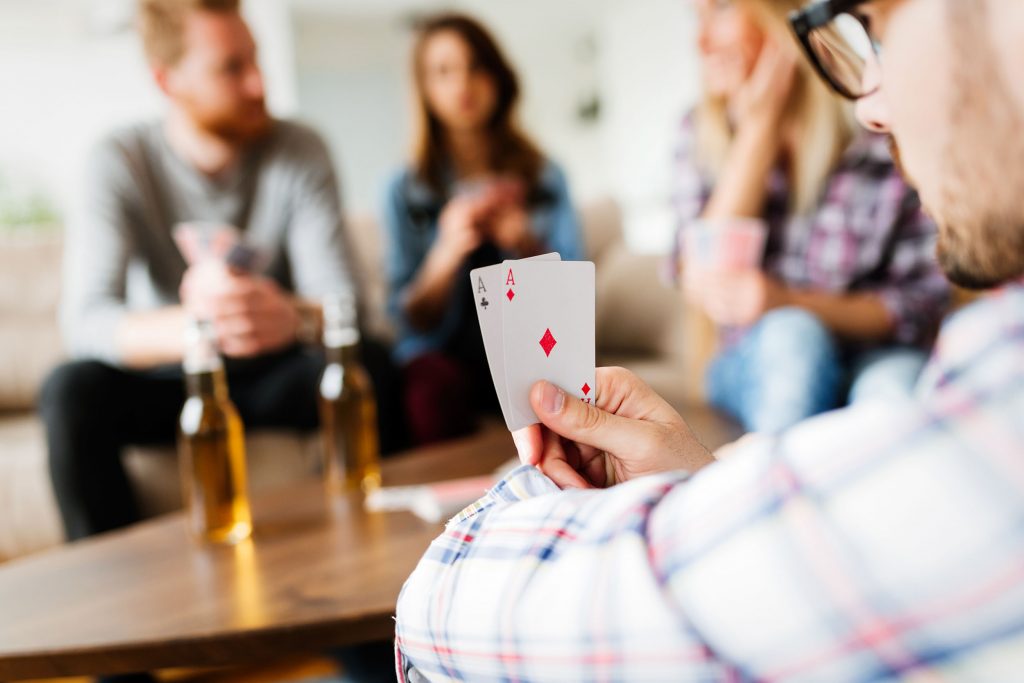 Cut the deck! December 28th is Card Playing Day. Why not celebrate by challenging your friends to a card game like Crazy Eights, Go Fish or Old Maid? In the meantime, shuffle through these fun facts about playing cards!

The holiday season has come and gone, and the end of the year is in sight. You know what you need to do now? That’s right, you need to sit back and play out a few rounds of solitaire, or maybe get the family together for a night of Texas Hold’em, Slap Jack, or War. Whatever your pleasure, Card Playing Day is a chance to wind down from all the kerfluffle of the season by engaging in a card game or three.

Playing cards are thought to have first been introduced to the world in China before spreading across the globe to India, Persia, and ultimately every corner of this… sphere. Ok, so that corner thing never has made sense, unless you’re talking about a rectangular playing card, which thankfully we are! A whole pack of them in fact.

Cards arrived in Europe some time towards the end of the fourteenth century, making their appearance known in major cities, like Florence and Paris. The cards, however, didn’t resemble the decks we know and love today. They were still very much a work in progress, with artisan card makers still trying to figure out the best designs and deck configurations. Most of their creations revolved around the original playing coins, cups, and sticks – gaming apparatus of choice for much of the early middle-ages.

Card playing continued to develop as a discipline. By the middle of the fifteenth century, it started to turn into something that we would recognize now. Between 1418 and 1450, card makers in Augsburg, Nuremberg, and Ulm began making printed decks, allowing people to purchase packs of cards for the first time. As manufacturers put the printing press to use, the popularity of cards grew even more, and their designs became increasingly complicated. They began printing cards with interesting symbols like hearts, acorns, bells, and shields. In France, card makers introduced clovers, pikes, and tiles. And by the time they reached England, the traditional suits of clubs and spaders were born, probably derived from the French clovers and pikes.

Playing cards hit the big time in 1628 with the founding of the Worshipful Company of Makers of Playing Cards. The organization, set up via a royal Charter, represented people throughout the industry. It was considered so important that even the king was involved!

Card markers continued to refine their craft and make it as user-friendly as possible. In the eighteenth century, they began rounding the corners of cards and adding printed edges, indicating the card type and value. Players could then hold a fan on cards in one hand, viewing the current position without using the other hand – which might be holding their drink!

Ultimately, playing cards became a pop-culture staple. Estimates from Columbia University suggest that there are at least 6,000 different types of the historical deck with provenance from over fifty countries, though there are likely more. What’s more, many of these use completely different deck systems from the basic hearts, diamonds, clubs, and spades.

Playing cards have always been the last bastion of entertainment in inclement weather, and thus were a favorite of the winter holidays. After all, before the invention of television and electricity, what was one to do when you’d heard all of Uncle Joe’s story, and couldn’t possibly bring yourself to lay your eyes on another dog-eared novel?

That’s right, you play cards! There are numerous games that exist in the world, hundreds from every culture imaginable. Some games are unique to a particular region, or at least distinct to it (Like Baccarat) or can be found in variations all over the world while clearly being recognizable (like poker). Others still involve the use of playing boards as a utility in keeping track of points, such as cribbage.

Card Playing Day is an opportunity and excuse to return to this age-old form of entertainment and to spend a little time alone, or connecting with your family.

It’s believed that playing cards were invented in China around the year 1000. The cards were made of wood, rather than the thin, plastic-coated paper that we use today. In fact, some decks were even made of bone! As for the first printed paper playing card deck? Those came on the scene in the 1300s.

The first playing cards were hand-painted with the artwork. It wasn’t until the late 1200s that cards began to include numbers and suits instead of art. Early cards didn’t feature the suits we’re used to — hearts, diamonds, clubs, and spades. Instead, the cards featured everyday objects like coins, swords, or cups. Around the late 1400s, playing cards in France began to include the four suits that we’re familiar with today.

The face cards in playing card decks were designed after people in history or mythology. For instance, the king of diamonds is said to represent Julius Caesar, the first emperor of Rome. The queen of spades signifies Athena, the warrior goddess in Greek mythology. And the jack of clubs is said to be Sir Lancelot, who was a knight in a British legend.

The oldest known deck of cards in the world dates back to the 15th century. It’s a 52-card deck from the Netherlands. The cards belonged to a collector, but he decided to sell the deck in 1983. He sold it to a museum in New York for nearly $150,000!