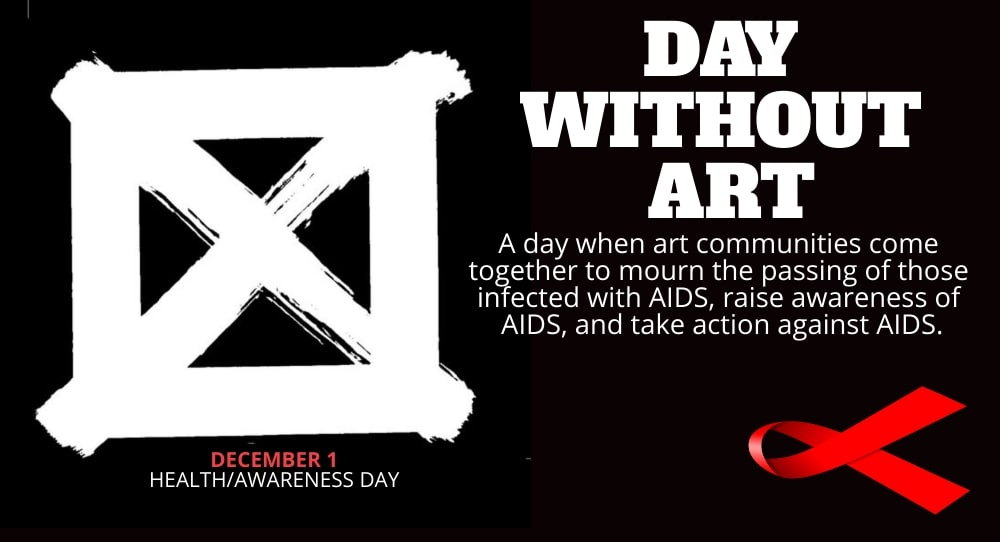 Day Without Art Day, coinciding with World AIDS Day, was created to both acknowledge and mourn the passing of those infected with AIDS, as well as take action against this disease that has killed thousands upon thousand of people the world over since the pandemic started in the 1980s.

In fact, by 1985, 12,000 Americans were known to have AIDS, and 7,000 died from it that year alone. Still, not many people saw it fit to discuss the pandemic that was taking the lives of so many friends and family members.

History of Day Without Art Day

Originally, when it was created in 1988, the day was called Day Without Art Day. The purpose of the day was to raise awareness about the disease, especially that it can in fact touch everyone, a fact that was not as well known in those days as it is today.

Furthermore, the creators of Day With Art Day wanted to inspire positive action by waking them up to the suffering around them and perhaps getting them to help the sick. The name of the day itself was intended to make people think what kind of place the world would be without art and artists, as many artists of the day were among those infected.

Thomas Sokolowski, then head of the New York University’s Grey Art Gallery and a gay artist himself, decided he had to do something. On the first Day With Art Day, some 800 American art and AIDS groups shut down museums for the day, sending the employees to volunteer at AIDS services, and some museums organized special exhibitions of various works about AIDS.

Since then the number of organizations involved has grown dramatically, to an estimated 8,000 national and international museums, galleries, art centers, AIDS Service Organizations, libraries, high schools and colleges taking part each year. In 1998, Visual AIDS proposed that the name of the day be changed to Day With Art, in order to help promote the annual cultural events that I turn help draw attention to the AIDS pandemic, even though the original intentions of the name “Day Without Art” were different.

They explained this decision, saying, “We added parentheses to the program title, Day Without Art, to highlight the proactive programming of art projects by artists living with HIV/AIDS, and art about AIDS, that were taking place around the world.”

Learn more about the movement. Join in raising awareness and educating the public about HIV and AIDS. Use #DayWithoutArt to post on social media.

Visual AIDS launched Day Without Art on December 1, 1989, as the national day of action and mourning in response to the AIDS crisis. Visual AIDS has initiated numerous projects to provide awareness and education regarding the prevention of AIDS, care of those who suffer, and to celebrate the lives and achievements of those who have been lost to AIDS.