National Eggnog Day is observed once a year on the day before Christmas. Also known as egg milk punch, eggnog is a popular drink throughout the United States during the holidays.

Eggnog is a sweetened dairy-based beverage traditionally made with milk and cream, sugar, whipped eggs, and spices. When served at parties and holiday get-togethers, liquor is often added to the eggnog, such as brandy, rum, whiskey, bourbon, vodka, or any combination. The full glass is typically garnished with a sprinkle of cinnamon, nutmeg, or pumpkin spice. Also used as a flavoring, eggnog creates delicious coffees, teas, baked goods, and puddings.

The armored infantry was Santa Claus, the battle was our Christmas. What else for the elves to do on Christmas Eve but to let their hair down and drink a little eggnog. — Hiroshi Sakurazaka

We all know that famous holiday drink, the one sold in stores only during the length of November through December. It’s eggnog! Whether we buy it in stores so the whole family can have a glass or make our own, eggnog has always been a staple drink for the Christmas season. The real question is, where did eggnog come from, and when did it come into existence? That’s what Eggnog Day is all about!

Eggnog is historically also known as milk punch or egg milk punch when it is mixed with an alcoholic beverage. It’s a rich, chilled, creamy, and sweetened dairy drink traditionally created with milk and/or cream, sugar, whipped eggs which helps it gain its frothy texture, and sometimes mixed spirits.

The origins of eggnog are highly debated as are the original ingredients used for it. The Oxford English Dictionary claims that nog was “a kind of strong beer brewed somewhere in East Anglia” But where and when did the term Eggnog originate from?

The first time the term “eggnog” was ever used was in 1775 when Maryland clergyman and philologist Jonathan Boucher wrote a poem about the drink, which surprisingly was not published until thirty years after his death! The poem, which you’re bound to be curious about, went like this.

“Fog-drams in the morn,
or better still egg-nogg.
At night hot-suppings,
and at mid-day, grogg.
My palate can regale”

The first printed use of the term was in 1788 in the New-Jersey Journal of March 26th, which referred to a young man drinking a glass of eggnog. Eggnog may have developed from posset, a Medieval European beverage made with hot milk that curdled up when mixed with wine or ale and was then flavored with spices. 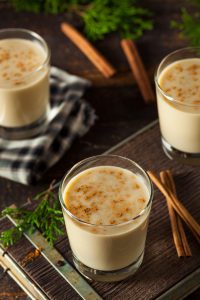 Consumption of raw or undercooked eggs, shellfish, and meat may increase the risk of foodborne illness.