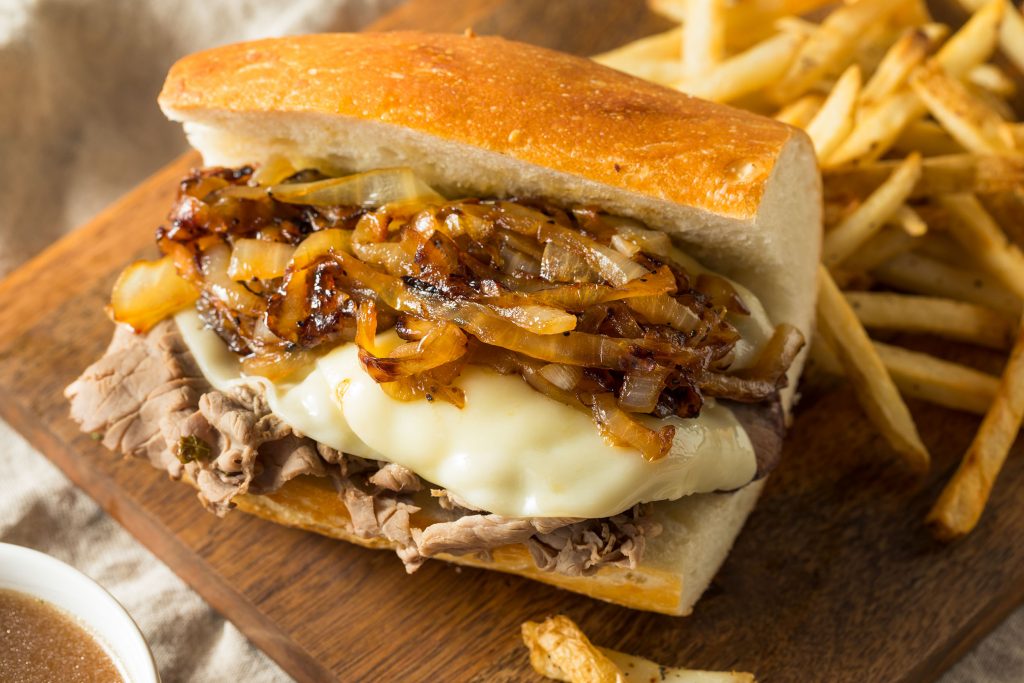 On November 12th, warm up some au jus and celebrate National French Dip Day! A “French dip” is a sandwich made of thinly sliced roast beef on a French roll, commonly served au jus “with [its own] juice” — is a standard menu item in many U.S. restaurants.

In its simplicity, the French dip isn’t the type of fare that gives many diners pause to wonder how, when, and where it originally came to be, but nonetheless, the paternity of this simple sandwich has been one of modern history’s longest-running culinary disputes, the subject of a debate long waged between partisans of rival claimants. 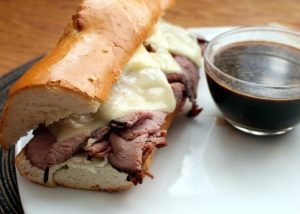 Served up hot, tender slices of beef or pork on a French roll make up a delicious sandwich. Sometimes cheese is added. However, the key ingredients are the au jus and spicy mustard. The combination of tender beef swimming in a flavor bath of pan drippings absorbed into the crusty roll makes the French dip a decadent, multi-napkin experience everyone needs to have. And if you’ve never had one before, follow the instructions below and find one.

When your order arrives, apply a generous helping of mustard. Next, dunk your sandwich into the au jus for 2-3 seconds. Permit the bread to soak up the delicious, au jus. Be prepared for a flavor experience when you take your first bite of a French dip!

Cole’s French Dip, claims to be the originator of the French Dip sandwich, founded National French Dip Day in 2018 in honor of the 110th anniversary of their opening on November 12, 1908, in historic downtown Los Angeles. The Registrar at National Day Calendar proclaimed the observance to be observed annually on November 12.

Two Los Angeles restaurants have claimed to be the birthplace of the French dip sandwich: Cole’s Pacific Electric Buffet and Philippe the Original. … However, Cole’s claims to have originated the sandwich shortly after the restaurant opened in 1908, while Philippe’s claims that owner Philippe Mathieu invented it in 1918.

Although the French Dip Sandwich is not French, the inventor, Philippe Mathieu was. In 1918, Philippe owned the still existing delicatessen and sandwich shop called Philippe the Original in Los Angeles. It is considered one of Los Angeles’ oldest restaurant still in business today.

According to the story at the restaurant, Philippe was preparing a sandwich for a policeman and accidentally dropped the sliced French roll into the drippings of a roasting pan. The policeman liked the sandwich and came back the next day with some friends to order the sandwich dipped in the meat pan. From that day on, a new sandwich was born.

Because of the 101 Freeway construction in 1951, Philippe’s moved to its current location on Alameda across from Union Station. Not much has changed since – the sawdust on the floors, cafeteria-style dining, and the hot mustard are still the same.

Matt Weinstock, then a reporter for the Los Angeles Daily News wrote:

“. . . Philippe’s was something special. It had sawdust on the floor and cracks in the wall but you didn’t care. Y ou went there for the luscious French-dipped sandwich, the boiled eggs, the hot mustard, the potato salad, the cole slaw, the immense hunks of pie, the always hot mugs of coffee. You also woke up at night, maybe thousands of miles away, yearning for one of those sandwiches.”

Philippe’s is still in the location they were in 1951, at a machine shop with a hotel on the second floor. Today, Philippe’s “French Dipped Sandwich” is the specialty of the house and consists of either roast beef, roast pork, leg of lamb, turkey or ham served on a lightly textured, freshly baked French roll which has been dipped in the natural gravy of the roasts. Swiss, American, Monterey Jack, or Blue cheese may be added.