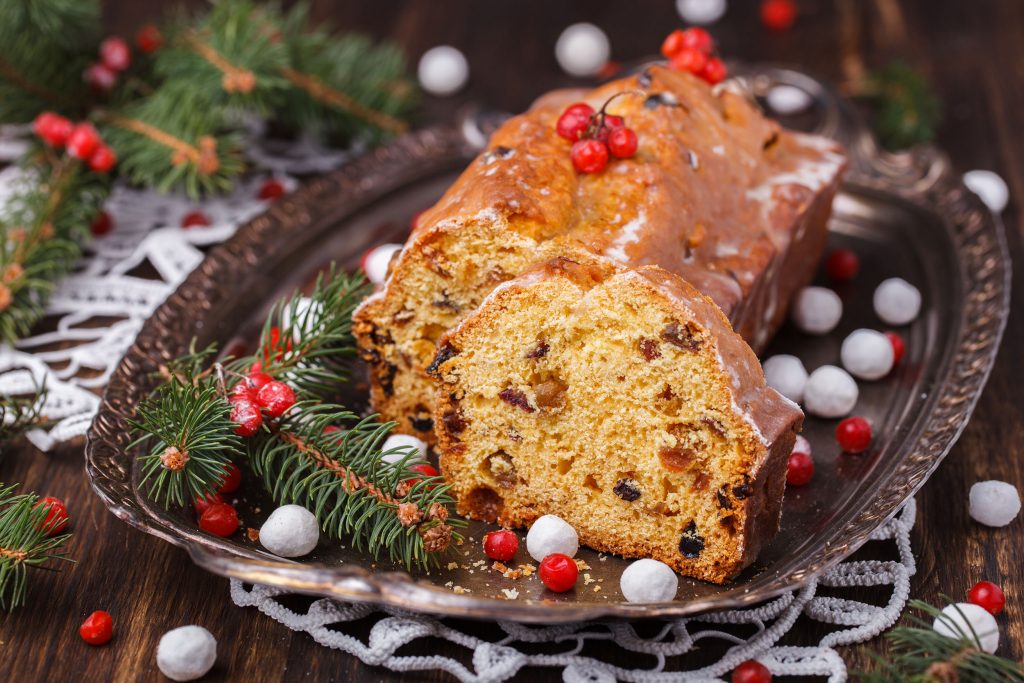 Across the United States, fruitcake lovers young and old, commemorate National Fruitcake Day each year on December 27th. Made with chopped candied or dried fruit, nuts, and spices and sometimes soaked in spirits, fruitcake has been a holiday gift-giving tradition for many years.

Fruitcakes, we’ve all seen them in the movies or in grandma’s kitchen. The heavy and dark cake that looks like it went through seven stages of baking and sounds like a fist thumping against a wooden table when set down on a surface. Yet, there is a day made for it. That’s right, this day is called Fruitcake Day and it’s made for the celebration of the cake that we all seem to find synonymous with a brick.

While none of us know the true creator of the fruitcake, many historians believe that fruitcakes originated from Rome, and one of the earliest recipes known comes from ancient Rome listing pomegranate seeds, pine nuts and raisins that were mixed into a barley mash. Then there are records from the Middle Ages documenting that they added honey, spices, and preserved fruits into the original mix.

Starting in the 16th century, sugar from the American Colonies along with the discovery that high concentrations of the sugar could preserve fruits, ended up creating an enormous excess of candied fruits, thus resulting in making fruit cakes more affordable and popular in regions around the world.

Fruitcakes have an incredible shelf life, they can remain on the shelves for many, many years and still be edible and non-harmful to the human body. An example of this is in a 2003 episode of The Tonight Show, where Jay Leno sampled a piece of a fruitcake baked in 1878 which was kept as an heirloom by a family in Michigan. For years now, the fruitcake has been a joke in American culture, being ridiculed for its name and how it appears. A recurring example of this can be found in a variety of television shows and movies, where the fruitcake will fall on a person’s body and they will complain about it being as hard as a brick. 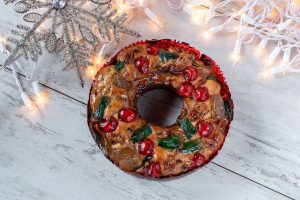 These days, fruitcake is often mentioned at the holidays but generally only in a disparaging tone. The heavy, alcohol-soaked, fruit and nut-filled cake that was once a holiday staple is now the laughingstock of the season. But it wasn’t always that way. There was a time that the fruitcake Aunt Doris sent you may have been the difference between life and death. Read on to find out why and to learn other interesting facts about fruitcake.

1. Fruitcake has been around forever, or at least as long as we have.

Forever may be a bit of a stretch, but no one really knows who made the first fruitcake or when it was made. Because fruitcake is dense and packed with calories, it was perfect for our hunter-gatherer ancestors and has always been a part of our culinary history.

Or at least it seems as if they last forever. This type of cake has an extraordinarily long shelf life due to the alcohol preservatives it contains.

They get better with age. Fresh fruitcake needs to sit and ripen for at least a month before it can be eaten and unlike most cake and bread, fruitcake only gets better with time.

4. Fruitcakes can be resurrected.

Even fruitcake will get stale if you store it too long or if it is stored improperly. Resurrect your fruitcake by steaming it which will bring back the flavor and the moisture.

5. Fruitcake can save your life.

One of the reasons fruitcakes were treasured throughout our history was because they were an efficient way to preserve food for long journeys and bitter winters. The long shelf life of a fruitcake meant that cakes could be baked in the summer and fall and used to supplement food stores over the entire winter.

6. Fruitcake can tell your fortune.

But only if you are female, single, and sleep with a piece of it under your pillow after you go to a wedding. If you are and you do, you will dream about your future husband.

In that both fruitcake and cricket games seem to appeal only to the British and both can take an entire week to complete. Fruitcakes require specific skills to mix and bake them properly a process that can last from several days to a full week.

8. Fruitcake is more than just fruity.

It’s also nutty. In order to be a proper fruitcake, it must contain nuts and the standard red and green candied fruits and it must be soaked in some kind of alcohol like rum or brandy.

9. Fruitcake is a good luck charm.

Nut growers used to bake fruitcakes at the end of one growing season and then wait until the end of the next season before eating them in order to ensure good luck and a successful harvest.

10. Fruitcake is the gift that keeps on giving.

If you don’t eat it this year or next year or in the next twenty years, you can always join the millions of others who have made fruitcake number 8 on the list of most re-gifted items.