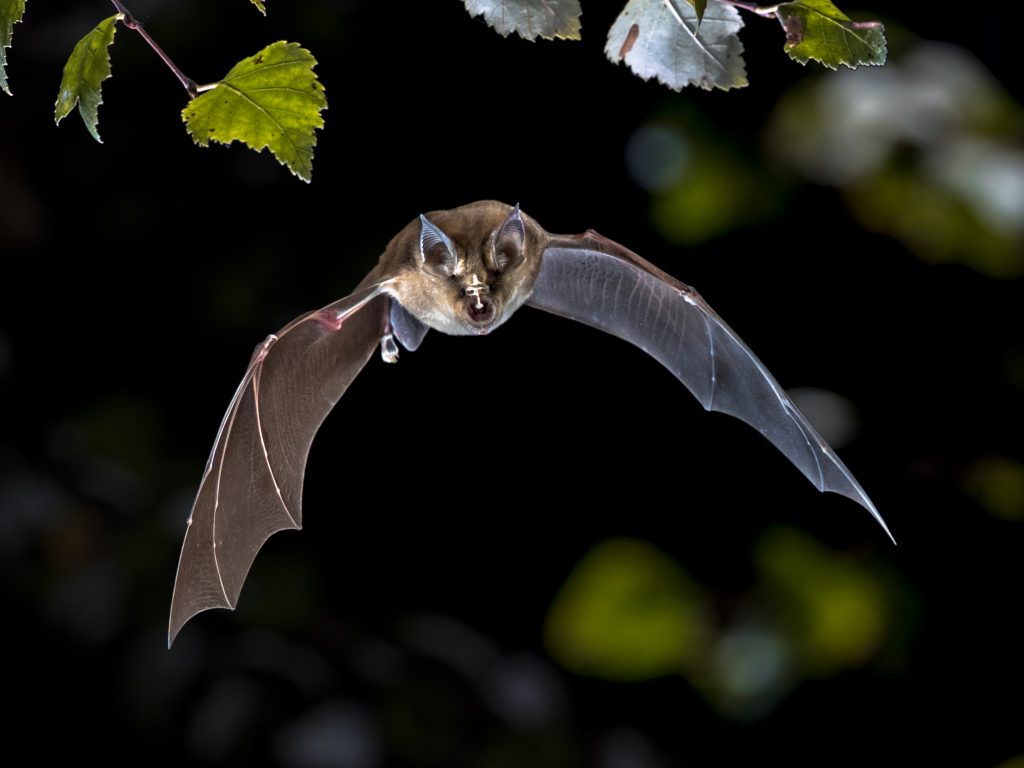 Bats drink on the wing, like swallows, by sipping the surface, as they play over pools and streams.

International Bat Night encourages us to learn more about this mostly nocturnal creature. It takes place each year during last full weekend of August. Bat Night started in 1997 and thirty countries celebrate the event to inform the public about the needs and benefits of bats in nature.

Despite what movies and novels might say, bats play an important part in keeping balance in nature. They consume insects that spread disease and damage crops. In the United States, little brown bats common in Kansas, use their echolocation to eat over 1,000 mosquitoes in a single hour. Bats help distribute plants by passing seeds through their feces. The spread of Guano seeds through bats is the main factor for tropical rainforest reforestation.

International Bat Night is a date that takes place every year to celebrate these creatures, with a number of different bat events taking place around the world for the public to get involved with. These events give you the opportunity to help bat conservation and to learn more about these creatures. There are talks at dusk and fun bat walks; it is definitely the sort of activity you should experience at least once, as it will give you a unique opportunity to get up close and personal with these incredible animals and to learn more about them.

When we say that bats are incredible creatures, we do not expect you to simply take our word for it. After all, bats are the only mammals that can fly. They also use echolocation in order to get around during the night. As you probably know, bats do most of their living when it is dark and they cannot see very well. Because of this, they need to depend on other navigational skills, instead of sight. They send out beeps, listening for variations in the echoes that bounce back in order to understand where they are and to get around effectively.

Bats have gotten a bit of a bad reputation over the years. However, most of this is unjustified. A lot of people think that bats, especially those in North America, go around infecting people with rabies and a whole host of other toxins and diseases. This is something that has merely become a rumor because of the television and movies. In fact, bats avoid people, and only 10 people in the last 50 years have contracted rabies from North American bats. If you are one of the incredibly unlucky ones to get bitten by a bat, make sure you go to see your doctor as soon as possible, but don’t panic, bats really aren’t as scary as it is made out in the films! Vampire bats also don’t suck blood, contrary to popular belief. Okay, they do lap it up, but calm down! There are actually only three species of vampire bats across the globe.

International Bat Night was established to help promote the good image of bats, and to help start creating some clarity on the facts about them above and beyond the rumors and Hollywood image. While we often think of bats as nocturnal predators feasting on the blood of the innocent and harboring rabies, the truth is quite different. Yes, there are bats that feed on blood, but they mostly feed on insects and believe us, you want bats to be out there patrolling the night and helping eliminate them.

Bats are one of the major contributors to keeping down obnoxious night insects like mosquitoes, and if you’re a camper, you know how unpleasant mosquitoes can make an otherwise pleasant camping expedition. There are also bats that feed on nectar and fruit, and actually help to pollinate and spread the seed of plants, in many cases they’re the only ones working to help those plants procreate!

These are just the beginnings of the wonders that bats possess, and there is far more just a flicker away, and International Bat Night is a great time to spend learning about them!

Hashtags to use to celebrate this event
Social Media Calendar Bookmark this page so you won't miss another relevant event or holiday!
Today is April 11. I hope you have a great day and remember what Henry David Thoreau said .... Go confidently in the direction of your dreams! Live the life you've imagined.