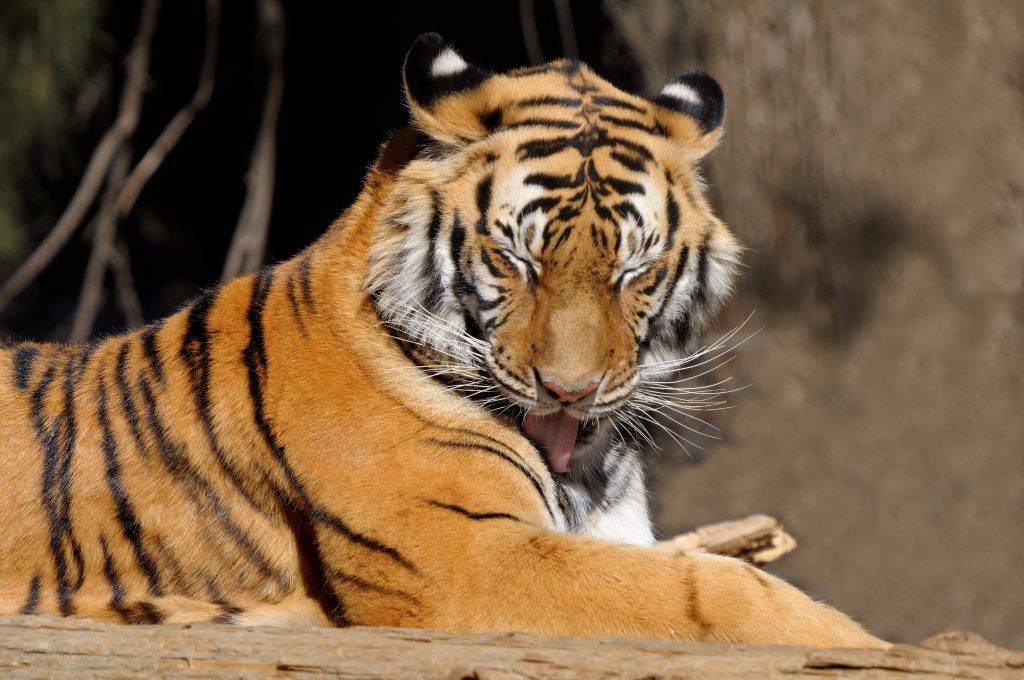 July 29th is International Tiger Day. The day was created so that people around the world can raise awareness for tiger conservation. The aim of the day is to help promote a worldwide system whereby we are dedicated to protecting tigers and their natural habitats.

The tiger is the largest of the world’s big cats and this magnificent creature, with its distinctive orange and black stripes and beautifully marked face, has a day that is dedicated to it.

We can use this day to support tiger conservation issues and to raise awareness. After all, when more people are aware of something, they are going to be more inclined to help, and that is why this day is so important.

Poaching and the illegal trade industry is a very worrying one. This is the biggest threat that wild tigers face. Demand for tiger bone, skin, and other body parts is leading to poaching and trafficking. This is having a monumental impact on the sub-populations of tigers, resulting in localized extinctions. We often see tiger skins being used in home decor.

Moreover, bones are used for medicines and tonics. This has seen illegal criminal syndicates get involved in the tiger trade in order to make huge profits. It really is a worrying industry. In fact, it is thought to be worth 10 billion dollars per annum in the United States alone. This is why we need to support charities and work hard to put an end to poaching and the illegal trade of tiger parts.

While this represents the biggest threats to tigers, there are a number of other threats as well. This includes habitat loss. Throughout the world, tiger habitats have been reduced because of access routes, human settlements, timber logging, plantations, and agriculture.

In fact, only around seven percent of the historical range of a tiger is still intact today. That is an incredibly small and worrying amount. This can increase the number of conflicts between tigers, as they roman about and try to locate new habitats. Not only this, but genetic diversity can reduce because it can cause there to be inbreeding in small populations.

This was first celebrated in 2010 and was founded at an international summit that had been called in response to the shocking news that 97% of all wild tigers had disappeared in the last century, with only around 3,000 left alive.

Tigers are on the brink of extinction and International World Tiger Day aims to bring attention to this fact and try to halt their decline. Many factors have caused their numbers to fall, including habitat loss, climate change, hunting, and poaching and Tiger Day aims to protect and expand their habitats and raise awareness of the need for conservation.

Many international organizations are involved in the day, including the WWF, the IFAW, and the Smithsonian Institute. 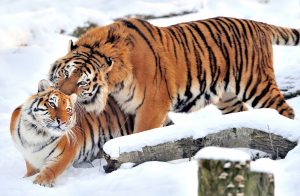 There are nine species of tigers …

The Siberian tiger is generally considered the biggest of the species, though it’s similar in size to the Bengal tiger. Its average size is around 5 – 7 feet long, and some males can reach 10 feet or more. The heaviest on record was a staggering 660 pounds!

The Siberian tiger is also known for its broad chest and a large skull. Since it lives in cold, snowy regions, including mountain passes, it has thick fur to help it survive harsh winters. It also tends to be a paler orange than its more vibrant cousins.

A fun fact about Siberian tigers is that they’ve been known to take down bears. While they prefer smaller prey like deer and antelope, they’ll go after bears when food is scarce. Sometimes, the bears strike back by killing young and female tigers. 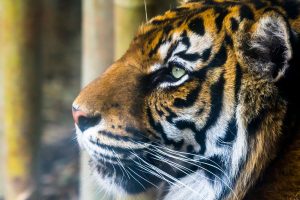 The Bengal tiger is one of the most well-known tiger breeds. In fact, it’s probably what comes to mind when you picture a tiger. It has orange fur with white tufts around the ears and black stripes down the back, and it boasts strong jaws, powerful hind legs, and front paws that can literally decapitate its prey.

Additionally, some Bengal tigers are born with a genetic mutation that gives them white fur and blue eyes. They aren’t actually albino; it’s just a quirk of the genes controlling their pigmentation. Both parents need to carry the gene for a cub to be born this way. It’s a rare coupling, so white tigers represent just one in every 10,000 births.

As one of the oldest tiger species, Bengal tigers have been around for 12,000 – 16,500 years. They date back to the Late Pleistocene period.

As its name suggests, the Indochinese tiger is found around the Indochina region of Asia. Its biggest populations are in Thailand, Burma, and Vietnam.

It’s sometimes known as Corbett’s tiger, and its scientific name includes corbetti. This is in honor of famous British hunter Jim Corbett. He was often called on to kill man-eating tigers and leopards in the early 20th century.

Like all living tiger species, the Indochinese tiger is endangered, and its numbers are dwindling fast. Some experts say that it should be classified as “critically endangered” now. There are only around 300 – 400 left.

Illegal trade is the main reason for its decline. Just about every part of the tiger can be used in rituals, medicines, clothes, jewelries and wines, so there’s always a demand for them. Pelts can be traded; claws and bones can be ground into pastes and poultices; internal organs can be eaten.

Illegal trade is the main reason for its decline. Just about every part of the tiger can be used in rituals, medicines, clothes, jewelry, and wines, so there’s always a demand for them. Pelts can be traded; claws and bones can be ground into pastes and poultices; internal organs can be eaten.

Regardless of what you call them, Malayan tigers are in trouble. They’ve gone from endangered to critically endangered in recent years, and their numbers are still on the decline. There are less than 200 mature adults who are capable of breeding.

Deforestation is one of the biggest reasons for the downfall of the Malayan tiger. Poaching is another. Like the Indochinese tiger, its bones and pelts are used in everything from traditional medicines to cultural rituals, and a tiger kill is considered a great status symbol among hunters. Conservationists are working hard to protect these tigers while there’s still time.

So what happened? In the 1970’s, when the Chinese government was clearing large swatches of land for commercial development, they kept running into tiger hordes. They declared them a pest and tried to exterminate them. The number of South China tigers dropped from more than 4,000 to 40.

The good news is that the government has changed its stance and is now trying to protect this critically endangered species. They’re considered a protected class, and zoos in China and South Africa are actively trying to breed them.

Another interesting fact about the South China tiger is that it might have a genetic mutation that gives it blue fur. This has never been proven, but eyewitnesses used to swear that they saw blue-white tigers in the mountains of China. If true, it would be an inherited trait much like the white mutations of the Bengal tiger, and an amazing animal to see!

Outside of zoos, Sumatran tigers are only found on the Indonesian island of Sumatra. Scientists believe that rising sea levels are what separated them from “mainland” tigers between 6,000 – 12,000 years ago, so while all of their cousins have close genetic ties, Sumatran tigers have evolved differently.

They tend to be smaller than other breeds. For example, they have about half of the heft of a Bengal or Siberian tiger. They’re only slightly shorter, but they have lighter builds and weigh significantly less.

Their stripes are another distinguishing feature. They have very dark, defined lines, and they stretch over the entire body. They even have stripes on their forelegs, which not all tiger species do.

Another notable thing about Sumatran tigers is that they’re the only surviving species of tiger in Indonesia. They’re critically endangered, but they’re hanging on. This distinguishes them from both the Bali and Javan tigers that lived in the same area but have gone extinct.

Congregating around the Caspian Sea, these tigers were fierce, powerful creatures with big skulls and even bigger bodies. The largest specimen ever recorded was 11.8 feet long!

Sadly, the Caspian tiger has been declared extinct. There are none in captivity, and they haven’t been spotted in the wild for decades. While it’s possible that there are still undiscovered groups out there, conservationists aren’t holding out hope.

When they were alive, Caspian tigers had muted colors. They were actually called “grey tigers” in their first sightings by 19th-century explorers. However, surviving pelts show that they had rusty orange fur with lots of brown.

The Bali tiger used to live on the Indonesian islands along with the Sumatran tiger and Javan tiger, but it hasn’t been seen since the 1930s, and it’s been considered extinct since the 1950s. When it was alive, it was known for being among the smallest types of tigers. Its only remnants in the world today are skulls and bones that have been preserved in museums.

The Javan tiger is the last of the “tiger trio” that once dominated Indonesia. Since it went extinct sometime in the 1970s, not much is known about it.

A cool thing, however, is that there are periodic reports of tigers in the area. In 2009, locals claimed to have seen a tigress with two cubs, and officials found fresh tracks on the ground. In 2010, after the eruption of a volcano, paw prints were seen in the ash. In 2017, a wildlife ranger in a national park took a picture of a tiger-like creature feeding on a bull.

These sightings might not be Javan tigers. They could be leopards or other big cats. And they could be the imaginations of hopeful locals. 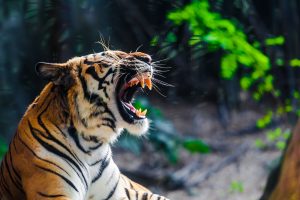 Tigers can be found in 13 countries.

Interestingly enough, there are no wild tigers in Africa.  In Africa, you can find leopards, lions, and cheetahs. But, surprisingly for many, there are no tigers living in the wild in Africa.