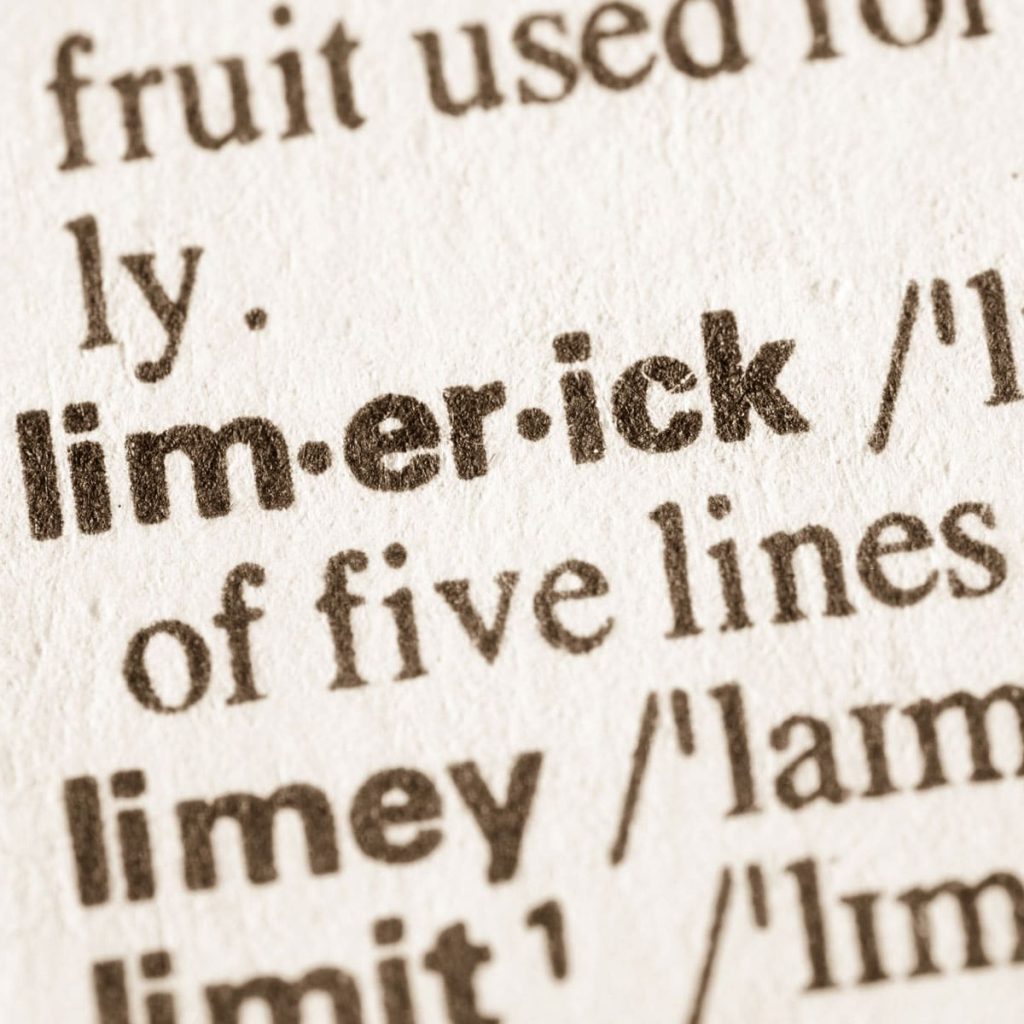 There was a young fellow named Lear
Who invented Limericks, we hear,
so now we converse
in humorous verse
on Limerick Day every year

Limericks were named after the Irish city of Limerick, and although limericks were not in fact created by Edward Lear, it was he who popularized them, bringing the love of limericks to the masses. Limericks could potentially date back as far as 500 years, however, it is currently unknown when the very first limerick was created, and whether it was created purposely or by a happy accident.

The distinctive sound of a limerick which uses a special meter and AABBA rhyming scheme are ideal for the creation of nonsense verses, which is why many limericks tend to have a childish or even obscene tone to them, ensuring that they pack a humorous punch. The best limericks tend to be both hilariously childish and somewhat obscene.

Each year on May 12th, Limerick Day celebrates the birthday of famous English artist, illustrator, and much-loved author and poet, Edward Lear. This multifaceted artist was born on May 12th, 1812, and lived until January 29th, 1888 and lived a long and vibrant life, making a significant contribution to the art world.

Limerick Day occurs on the birthday of Edward Lear to celebrate the incredible works he created during his life, including his many whimsical limericks. However, Edward Lear was also known for his prose and poetry, among other areas of the arts.

Edward Lear is primarily famed for his literary artistry in poetry, prose, and fittingly as the day is named, limericks. Limerick Day focuses on celebrating limerick poems, which were popularized by Edward Lear’s famous book of poems named ‘Book of Nonsense’ which was published in 1846 when he was 34-years-old.

What is a limerick?

A limerick is a special type of poem that is short, packed full of humor, and is made up of ‘nonsense’; a limerick is meant to be funny. A limerick is made up of five lines. The first two of the five lines must rhyme with the fifth line, whilst the third and fourth lines of the limerick should rhyme together. Another unique feature regarding a limerick is that it should have a particular rhythm – this rhythm is described as being an ‘anapestic trimeter’.

Limericks are renowned for the humor and fun they bring to traditional poetry; incorporating a number of interesting and nonsensical themes. A limerick can be whatever the writer wants it to be; the point of writing a limerick is to incorporate humor into the piece and have a little fun with words.

Limericks are meant to be instantly recognizable from the rhythm that the verses create, limericks are carefully constructed to create humor and bring laughter.

One of Edward Lear’s most famous Limericks is ‘There was a Young Lady’ – the limerick goes like this:

‘There was a Young Lady whose chin
Resembed the point of a pin;
So she had it made sharp, and
purchased a harp,
And played several tunes with her chin.’

Or, how about this one?

‘There was an Old Man with a beard,
Who said, ‘It is just as I feared!
Two Owls and a Hen,
Four Larks and a Wren,
Have all built their nests in my beard!’’

WHY WE LOVE NATIONAL LIMERICK DAY