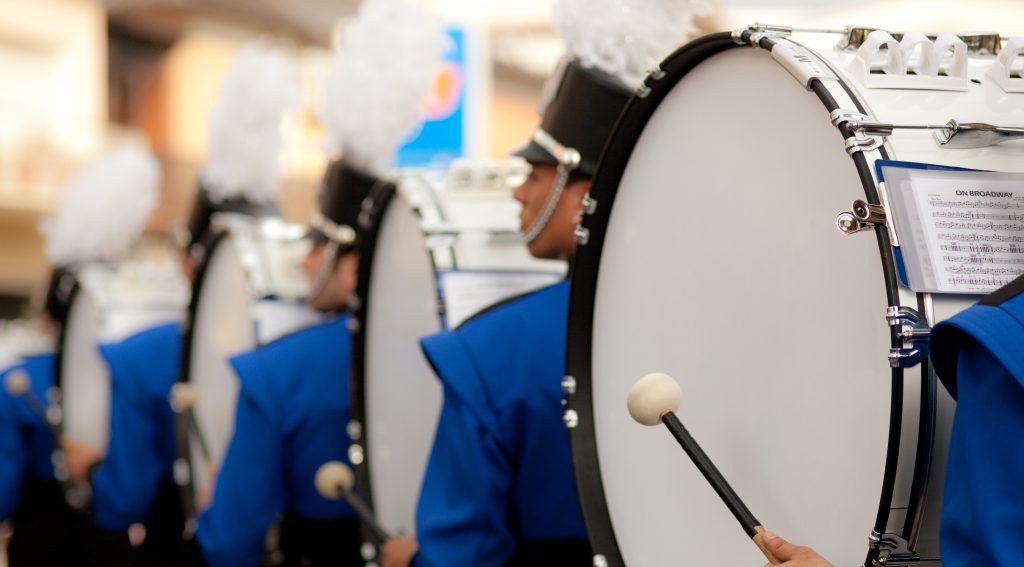 March forth to the rhythm of life on Marching Music Day every March 4th and honor the dedicated musicians and performers of many diverse styles and backgrounds. Marching Music Day celebrates all varieties of art forms that bring us “music on the move.”

For centuries, the beat of a drum has kept military units moving in unison. From the training field to the battlefield, the football stadium to the Broadway stage, marching music delights performers and spectators. They perform in small gyms, auditoriums, and grand arenas. From small parades to impressive spectacles, fifers, pipers, buglers, drum corps, marching bands, parade groups, drill teams, and color guards bring music to life. They bring audiences to their feet and stir a crowd to an enthusiastic roar.

I did the marching band all throughout junior high and high school. Music was one of my favorite things in school.

Marching Band Day is a day that has been designed to build awareness around the marching arts. It is all about those cheerful and upbeat bands, which happen to move around while they are playing music. You will often find that marching bands play an important role in a lot of festivals, parades, and outdoor events. Not only this, but they are traditional, having first appeared in the 1800s. Therefore, it is only right that we celebrate this incredible form of music and entertainment with Marching Band Day.

From the Broadway stage to football stadiums, the battlefield, and the training field, you will find marching bands in many different establishments. They delight spectators and performers with their amazing music, as well as keeping military units moving. They perform in grand arenas too, as well as auditoriums and smaller venues. This is one of the most versatile forms of music and entertainment.

Marching bands also play a critical role in terms of keeping the military upbeat. They have long been involved in the roots of the military, and they have evolved as time has gone on. Marching music can thrill the military during times of celebration or moments of upliftment. Marching music also helps to move people during somber memorials as well. They engage with people of all experience levels, abilities, ages, and personalities.

The military roots of the drum corps have evolved over time. A well-rooted art form, marching music moves us during somber memorials. And yet it thrills us with an ability to perform delightful music and execute intricate routines with exact precision. Drill squads, marching bands, drum lines, and drum corps name but a few of the many styles of marching music that have developed over the years. They all engage hundreds of thousands of performers of all ages, abilities, and experience levels.

We see marching music in schools, military units, community celebrations, and local auxiliaries. The music is as varied as the ensembles themselves, too! Instruments may be limited to brass in some settings or may include woodwinds and electric guitars in others. Dance teams, baton twirlers, and color guards perform to soundtracks ranging from traditional, standard marches to rock and roll, jazz, contemporary, and electronic dance music.

And marching music keeps changing! Spectacular string bands incorporate their own unique sound and elaborate costuming. Technology has brought about the production of lighter, electronic, and digital instruments making it possible for musicians to march with violins, cellos, basses, and synthesizers to entertain crowds in unique and creative new ways.

Drum Corps International founded Marching Music Day to celebrate marching music as an engaging and ever-expanding art form around the world, and to help celebrate Music In Our Schools Month. As an ideal play on words, March Fourth was chosen. The Registrar at National Day Calendar® declared the day to March forth into celebration annually, beginning in 2017.