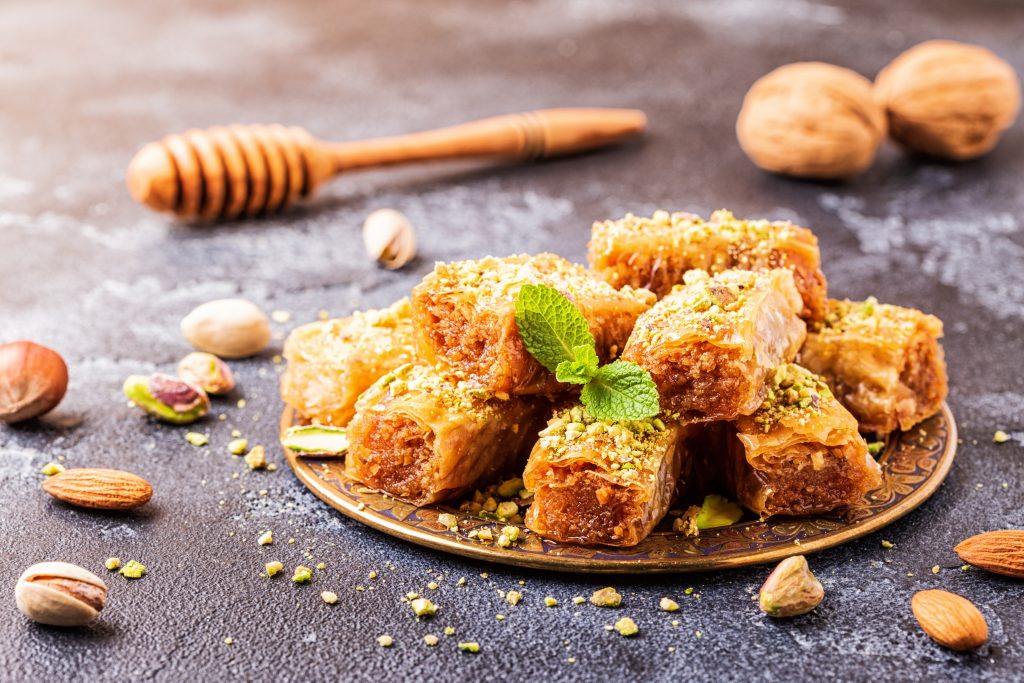 Each year on November 17th, National Baklava Day fills the kitchen with a sweet and flaky pastry that’s loved by many. Baklava is a sweet dessert that gives layers of texture and flavor between sheets of filo pastry filled with chopped nuts and drizzled with syrup or honey.

Believed to have originated by the Turkic people in Central Asian nations, Baklava is a dessert in many countries and prepared in several ways.  The word “Baklava” first appeared in English in 1650.

If you’ve never tried baklava, there are several varieties. Walnuts, pecans, pistachios, or almonds can be used. The filling can be composed of raisins, dates, prunes, and even figs. Most baklava recipes call for cinnamon, cardamom, or cloves – sometimes all three spices.

Preparing this dessert may be somewhat time-consuming. However, it is a treat worth the work and the wait.

Modern baklava may have been invented in Turkey during the Ottoman Empire, then modified in Greece. Many Meditteranean countries have their own versions of baklava, slightly tweaking the recipe to make it unique.

Baklava recipes can vary, but they always include these essentials: phyllo (or filo) sheets, sweet syrup (typically honey mixed with juices and spices), nuts (often pistachios), and butter.

Like other phyllo-based pastries, baklava is made by brushing the thin, papery sheets with butter and layering them with nuts, sugars, and spices. Baklava is topped with a sweet honey-based syrup that is allowed to soak into the stacked layers.