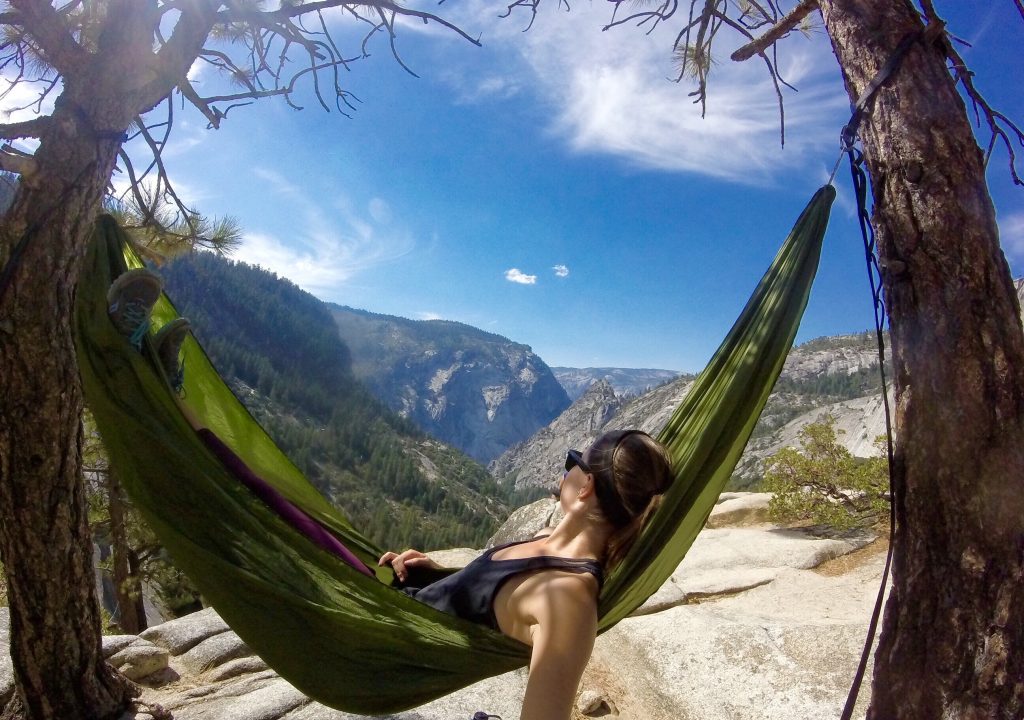 On July 22nd, relax in the shade and enjoy National Hammock Day. These portable, comfortable slings create excellent napping spaces no matter where you are!

A hammock is a sling made of fabric, rope, or netting. When suspended between two points, a hammock forms a sling used for swinging, sleeping or resting. We usually suspend a hammock between trees or posts.

The hammock dates back thousands of years to Central America where it protected people from creatures and dirt. However, the netted bed didn’t find Europe until explorers brought it back in the 17th century. Not long after, the hammock found its way onto naval ships, providing comfort and maximizing space.

After swaying across the oceans, the hammock eventually became a more leisurely item. Made from a variety of fabrics, it suspended between trees in backyards and at lake cabins. Easily packed into a backpack, hammocks became essential elements of survival. Hikers, campers and mountain climbers added the light and compact sleep sling to their kits.

If the leisure of hammocks seems ho-hum to you, don’t go the relaxing route. Extreme hammocking puts the adventure into your rest and relaxation. Thrill-seekers sleep in hammocks hundreds of feet above a canyon floor.

Whether you use a hammock to take a nap or as a convenient tool in your camping kit, July 22nd second recognizes one innovative way to catch some sleep.

Since the 13th century, humans have enjoyed napping and resting in hammocks that have been tied together between two trees. The word “Hammock” originated from a Taino culture Arwakan word meaning “fishnet”. The name is also derived from the Hamack tree because hammocks used to be woven from their bark. Though hammocks are used around the world, their popularity is arguably at its peak in Latin America, and some say that hammocks embody the ‘relaxed’ lifestyle traditional to those countries and the Caribbean.

It was invented by the native-born people of Middle and South America, who called them “Hamacas”, in the Taino language. Columbus first encountered the hammock in the Bahamas. He observed in 1492 that “people were sleeping in nets between the trees”. He brought the hammock back to Europe where sailors started using it extensively because swinging while suspended in the air led to better sleep than they were previously experiencing on the dirty ship floor.

Nowadays the hammock serves as a bed to some or a symbol of leisure to others. Popular brands like ENO have made hammocking stylish with their sleek materials and colors. Many people today would consider hammocking a social activity, or a place for personal relaxation. Hammocking can be a fun way to spend time with the people you are closest to.

NATIONAL HAMMOCK DAY BY THE NUMBERS