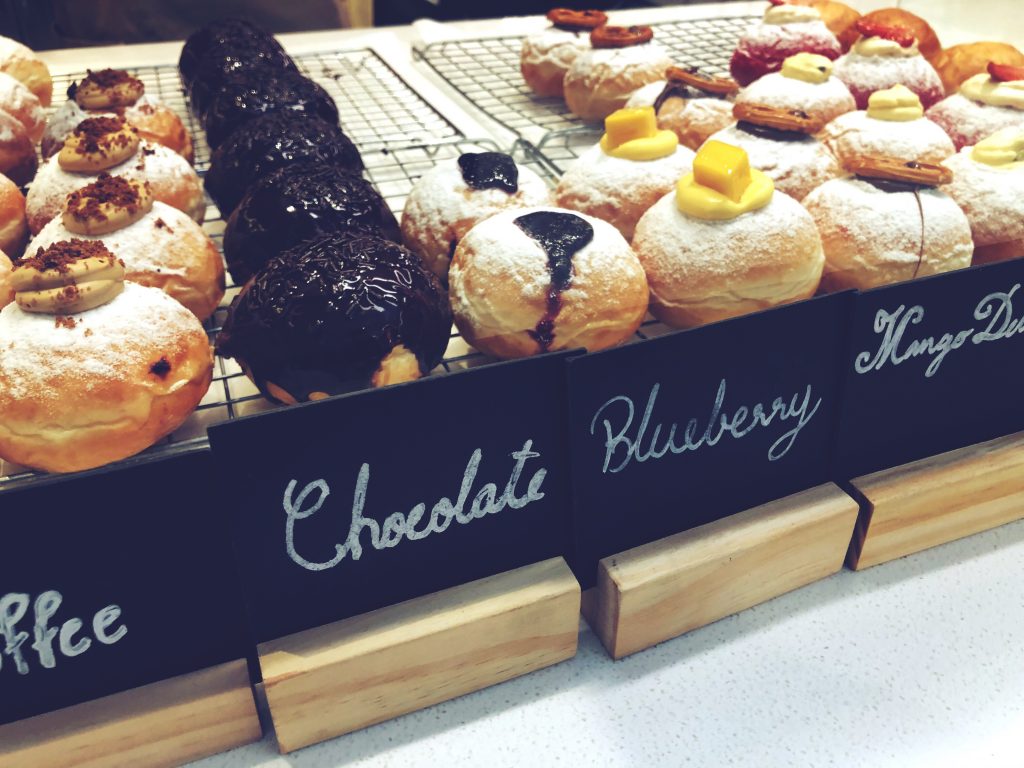 The first Friday in June is the other day doughnuts steal the bakery case spotlight ready to tease their way into white bakery box home!

For more information on the National Doughnut Day celebrated in June.

History disputes the origin of the doughnut. One theory suggests Dutch settlers brought doughnuts to North America much like they brought other traditional American desserts. They receive credit for such desserts as the apple pie, cream pie, and cobbler.

Doughnuts come in many shapes. Was the original doughnut round? If so, American, Hanson Gregory laid claim to inventing the ring-shaped doughnut in 1847. He was on-board a lime-trading ship. Only 16 at the time, Gregory claims he punched a hole in the center of dough with the ship’s tin pepper box. Later, he taught the technique to his mother.

Traveling further back in time, we look at an English cookbook. According to anthropologist Paul R. Mullins, an 1803 volume included doughnuts in the appendix of American recipes. However, the earliest recorded usage of the term doughnut is found in a short story in a Boston Times article about “fire-cakes and dough-nuts” published in 1808.

A more commonly cited first written recording of the word is Washington Irving’s reference to doughnuts in 1809 in his History of New York. He described balls of sweetened dough, fried in hog’s fat. The author called them doughnuts. Today, these nuts of fried dough are called doughnut holes.

Another author, William Cullen Bryant describes doughnuts fried in lard in his book Picturesque America; Or, the Land We Live In which was published in 1872.

The more traditional spelling is doughnut. However, both doughnut and donut are pervasive in American English.

Doughnuts come in a large variety of recipes, flavors, and toppings. However, just like many pastries, we are only limited by imagination and ingredients at hand. From syrups and jellies to sprinkles and custards, top them, fill them, bake them or fry them. Doughnuts have a mouth-watering way of glazing and dusting their way into our shopping carts. They also slip into the break room at work to share.

How To Celebrate Doughnut Day

So, what could you do to celebrate Doughnut Day? Well, you could buy yourself a box of Krispy Kremes for starters, and indulge yourself on your favorite flavors.

You celebrate the charitable spirit of the day that brought Doughnut Day to fruition. You could raise funds for the Salvation Army or another charitable group that works with our armed forces, or you could volunteer your time.

If you are going to raise funds, then you might want to learn how to create your own doughnuts, and then sell them to the people who live around you. You could also create doughnuts for any members of ex-members of the Forces within your friends and family, and serve them up a tasty treat.

You might consider showing your charitable side in any other way, be that by donating money to a cause that means something to you, or by volunteering your time to help, perhaps on a regular basis.

So, think about what you could do this Doughnut Day. Whether you eat them, share them, or use them as a means to do good in the world, celebrate this day in your own particular style.