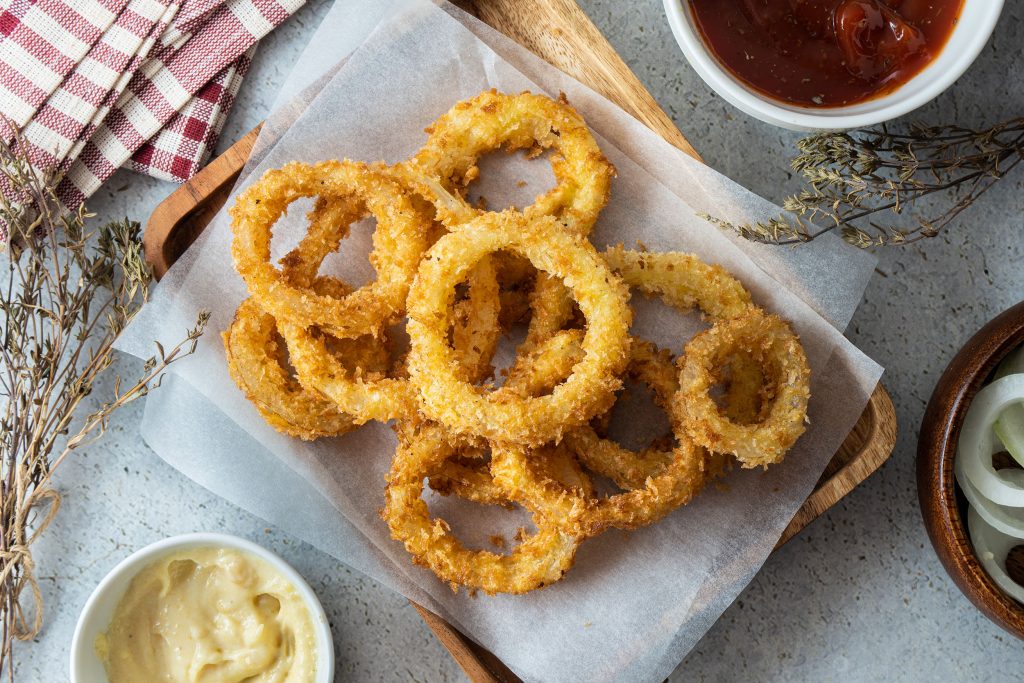 On June 22nd, National Onion Rings Day recognizes a batter-dipped, deep-fried bite of deliciousness that runs rings around other appetizers.

They’re rich and crisp and delicious, surprisingly sweet for a flavor so often related to being spicy and the source of tears. But something about the process of breading them in a flavorful coating and deep-frying them in a vat of oil brings out the delicious flavors hidden inside. They come in towers and flowers, giant-sized and tiny, and they’re a favorite at burger joints all over the world. That’s right, we’re talking about the onion rings, and Onion Rings Day celebrates this delicious treat and its long history.

The origin of the onion rings is actually somewhat mysterious, but we do know that in 1802 a recipe was published in ”The Art of Cookery Made Easy and Refined.” This recipe describes a process of dipping ½” onion rings dipped into a rather flavorful mixture of flour with creams and cheeses and then boiling them in a vat of lard. Following on the heels of this was a suggestion to serve it with a sauce made of a mixture of mustard and butter.

Since then, there have been many refinements of the onion rings recipe, with a great debate existing on the proper method and what brings out the best flavor. There are hundreds of recipes involving different mixtures of batter to coat them in, different sauces to dip them in, and even the type of onions you use to prepare them.

As if that wasn’t complicated enough, there’s even a variety of onion rings that are made from an onion paste formed into a circle instead of an actual slice of onion. If you’ve ever enjoyed these delicious treats, then Onion Rings Day provides you with an excuse to go to your favorite source and consume onion rings until you burst.

Onion rings aren’t just an invention of the western world. There’s also evidence that people experimented with the idea of covering strips of onion with batter and deep-frying them in developing countries too. In India, for instance, merchants would often sell fried, battered onion strips as street food – a quick snack that people could munch on the go.

As we discussed, historians have found examples of onion ring-like recipes that date back as far as 1802. With that said, there are restaurants in operation today that claim to be the originators of the idea.

Kirby’s Pig Stand – the famous historical restaurant chain – claims to have battered and served up the first official onion rings as far back as the 1920s. The restaurant’s location in Dallas, TX, was the first in the world to offer a drive-in service where people could collect food from the convenience of their vehicles.

In many ways, the outlet was the progenitor to the modern fast-food restaurant. The roof was red-tiled and pagoda-like in appearance, and the outer walls made heavy use of stucco to brighten the exterior. Over the years, the company built many more outlets, but eventually, chains like McDonald’s and Taco Bell bought them up. In 2006, the company went bankrupt, and the last restaurant closed.