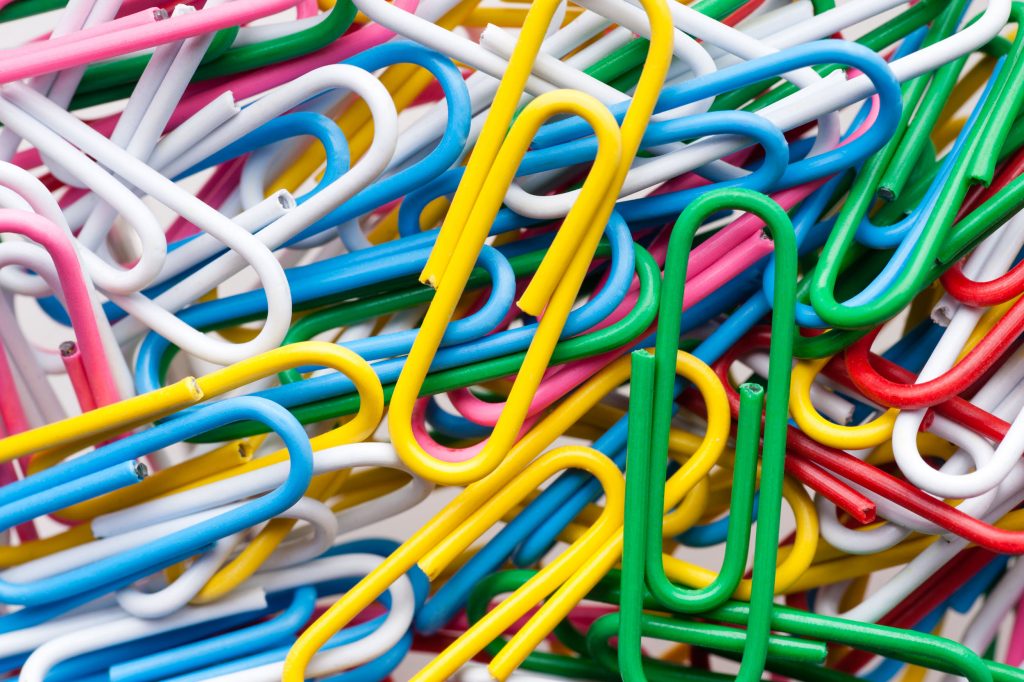 National Paper Clip Day is celebrated on May 29th of each year.

A paper clip (or sometimes paperclip) is a device used to hold sheets of paper together, usually made of steel wire bent to a looped shape, though some are covered in plastic. The paperclip – an essential item for any office anywhere in the world, usually found hiding in drawers, pen holders, everywhere. But, there’s more to these little pieces of wire than meets the eye.

The design of the paperclip familiar today has never been patented. It is not known for sure who invented it or where it was invented. What is known was that paper clips with the same design were in production in Britain in the 1870s where it was made by the Gem Manufacturing Company Ltd, which suggests – but doesn’t prove – that they may have been invented there. The Gem paperclip, as it became known, was introduced to America in 1892. It went on to become the most common paperclip in use all over the world.

Did you just roll your eyes at the idea of the best little piece of metal known as the paper clip should have its own holiday? Have you ever worked in an office? If not, we can see how you might not get it—and that’s alright, we’re about to explain everything to you. But if you have, you know exactly where we’re coming from—and don’t worry, we have some interesting information for you, too. So let’s get on with Paper Clip Day, shall we?

The first patent for a bent wire paper clip was awarded in the Samuel B. Fay in 1867 in the United States. Originally, the paper clip was designed for attaching tickets to fabric, although the patent recognized that it could be used to attach papers together. However, that model of a paper clip did not resemble the one we know today all that much. The paper clip as we know it was most likely designed by Norwegian inventor Johan Vaaler.

Years later, during World War II, the paper clip was used as a symbol of the Norwegian resistance to Nazi German occupation. Meant to show solidarity with other Norwegians during those difficult times, paper clips were worn in coat lapels by many. The Nazis saw this show of solidarity as a threat, and they soon prohibited paper clips altogether, threatening people who dared wear them with severe punishment. In fact, an enormous paper clip over a meter wide and five meters tall was erected in Sandvika, Norway, to remind people about the role this tiny object played in the nation’s history.

You have to admit you never thought paper clips had such an interesting history, don’t you? Starting in 2015, Paper Clip Day is now celebrated every year on May 29th.