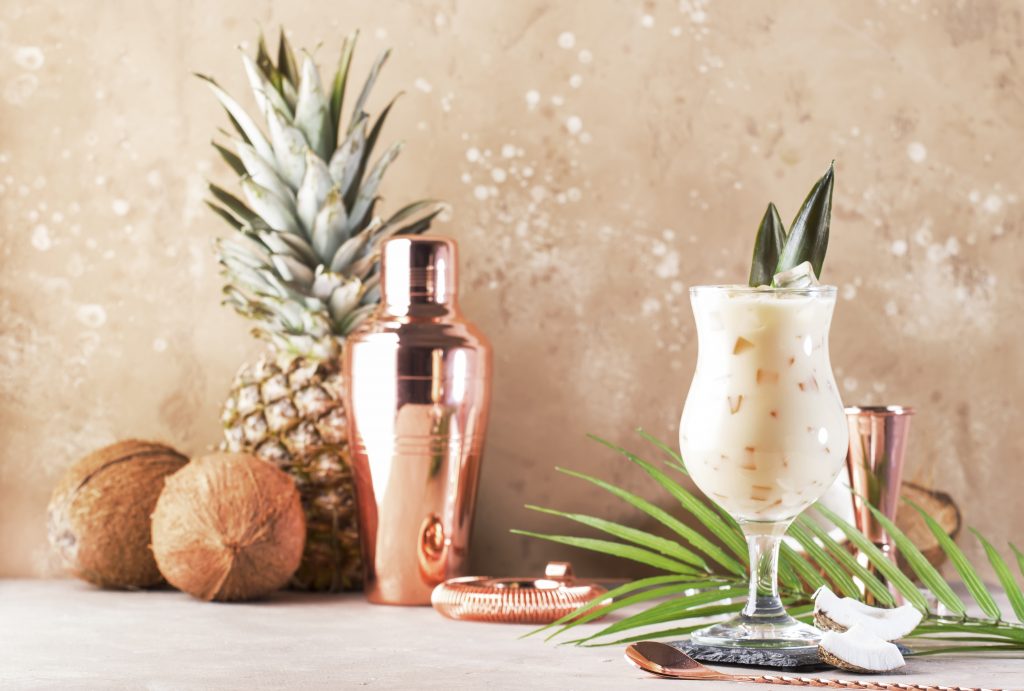 If you like piña coladas and getting caught in the rain
If you’re not into yoga if you have half a brain – Escape (The Pina Colada Song)”, by Rupert Holmes

The Pina Colada has a long and noble history, both as a mixological standard and as the heart of a song about not giving up on love, just because you think it’s gotten stale.

The name for the drink comes from the basis of its creation, Piña meaning “Pineapple” and Colada meaning “Strained.” This drink is a delicious mix of all the things that speak to the Caribbean and tropical locales, with the pineapple juice mixed together with a rich coconut cream, spiked up with just a bit of white rum into the mix.

Is there anything that speaks more of warm white sand beaches and beautiful azure skies than a drink that was born on those same shores?

History of the Piña Colada

Yes, I like piña coladas and getting caught in the rain
I’m not much into health food, I am into champagne

As befits a drink born of tropic fruits from tropical shores, stirred with a drink distilled from the rich sugar born drink favored by merchants and pirates alike, the history of the Pina Colada is steeped in mystery, folklore, and conflict.

The first and oldest story of the drink is born in the Caribbean waters around Peurto Rico, upon the ship of one Roberto Cofresi, Captain of a crew of the foulest batch of pirates to sail the seas in the early 19th century. While this is the earliest known origin of the drink, used to boost the morale of the crew, the recipe was lost for a time after his death in 1825.

It wasn’t until 1954 that the drink was to find itself rediscovered by one Ricardo Garcia, a mixologist born in Barcelona and working at a Hilton. This story tells that it was discovered as a series of fortunately unfortunate events, starting with a strike of the coconut cutters union that led to a shortage of the favored cup of the resort’s favored drink, the Coco-Loco.

Without a freshly macheted coconut shell to serve it in, Ricardo adapted to the circumstances in front of him by presenting the drink in a hollowed-out pineapple instead. Thus, according to this bit of lore, the Pina Colada was reborn.

Take this mixture and stir in crushed ice until it’s good and smooth, pour into a glass that’s been chilled, garnish it with a slice of pineapple and an umbrella, and serve it to your favorite set of reprobates!

The Tropics by Storm

Pour this mixture into a cocktail mixture filled with ice, and shake it until thoroughly mixed, fill the coconut half half-full with chunks of frozen pineapple of various sizes, and pour the mixture over it. Serve with a festive straw and be ready to drown in a Tropic Storm of flavor!