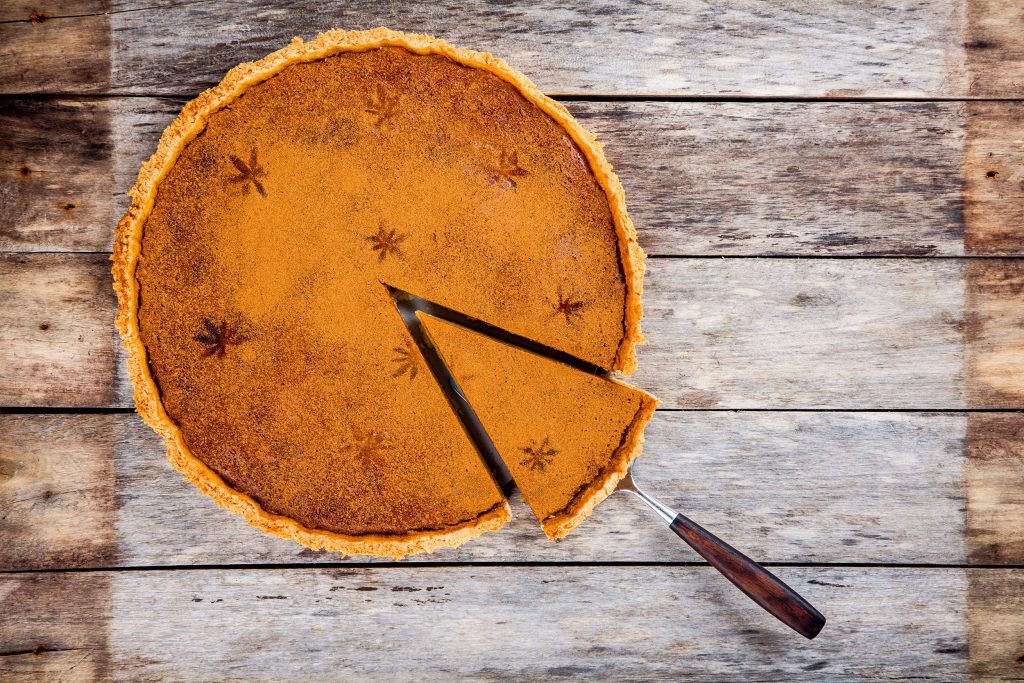 National Pumpkin Pie Day is an annual event, observed every year on December 25.

Pumpkin Pie Day celebrates the humble pumpkin pie, a national favorite in the USA. Pumpkin pie is a traditional North American sweet dessert, eaten during the fall and early winter, especially for Thanksgiving and Christmas. The pumpkin is a symbol of harvest time and featured also at Halloween.

The pie consists of a pumpkin-based custard, ranging in color from orange to brown, baked in a single pie shell, rarely with a top crust. The pie is generally flavored with nutmeg, cinnamon, cloves, and ginger. This pie is often made from canned pumpkin or packaged pumpkin pie filling (spices included); this is a seasonal product available in bakeries and grocery stores, although it is possible to find year-round.

Pumpkin pie was not served at the first Thanksgiving, though pumpkins were used in other recipes at the time. The world’s largest pumpkin pie weighed over 350 pounds and was made with 80 pounds of pumpkin, 36 pounds of sugar, and 144 eggs.

Early American settlers of Plimoth Plantation (1620-1692), the first permanent European settlement in southern New England, might have made pumpkin pies (of sorts) by making stewed pumpkins or by filling a hollowed-out shell with milk, honey, and spices, and then baking it in hot ashes.

The first recorded recipe for “modern” pumpkin pie was published in 1796 in American Cookery by Amelia Simmons. It was called ‘Pompkin Pudding.’ The cookbook was the first one devoted to foods native to the Americas.

Why not try your hand at making a pumpkin pie for yourself?

For the pumpkin: Preheat the oven to 375 degrees F.

Remove the stem from the pumpkin and scrape out the insides, discarding the seeds. Cut the pumpkin in half and lay the pieces cut-side down on a rimmed baking sheet lined with aluminum foil. Rub canola oil all over the skin and bake until fork-tender, about 1 hour. Let cool.

For the easy pie crust: While the pumpkin is cooking, make the crust. In a large bowl, combine the flour and salt. Add in the butter and work into the dough with a fork until the mixture is crumbly. Stir in just enough cold water (4 to 5 tablespoons) with a fork just until the flour is moistened. Divide the dough in half, shape each half into a ball and flatten slightly. Wrap one ball in plastic wrap and refrigerate for another use.

Roll out the remaining dough ball on a lightly floured surface to a 12-inch round. Transfer to a 9-inch-diameter glass pie dish. Fold the overhangs under and crimp decoratively. Pierce the dough all over with a fork. Chill in the refrigerator for 15 minutes.

Line the crust with foil, fill with dried beans or pie weights, and bake until the sides are set, about 12 minutes. Remove the foil and beans. Reduce the oven temperature to 350 degrees F.

For the filling: Scoop out the pulp from the roasted pumpkin and puree in a food processor until smooth (you should have about 4 cups). Add the condensed milk, cream, cornstarch, molasses, canola oil, cinnamon, ginger, salt, and eggs and combine thoroughly.

Pour the filling into the crust and bake until the filling is set in the center, about 1 hour. Transfer the pie to a rack and cool for 30 minutes. Serve at room temperature or chilled.