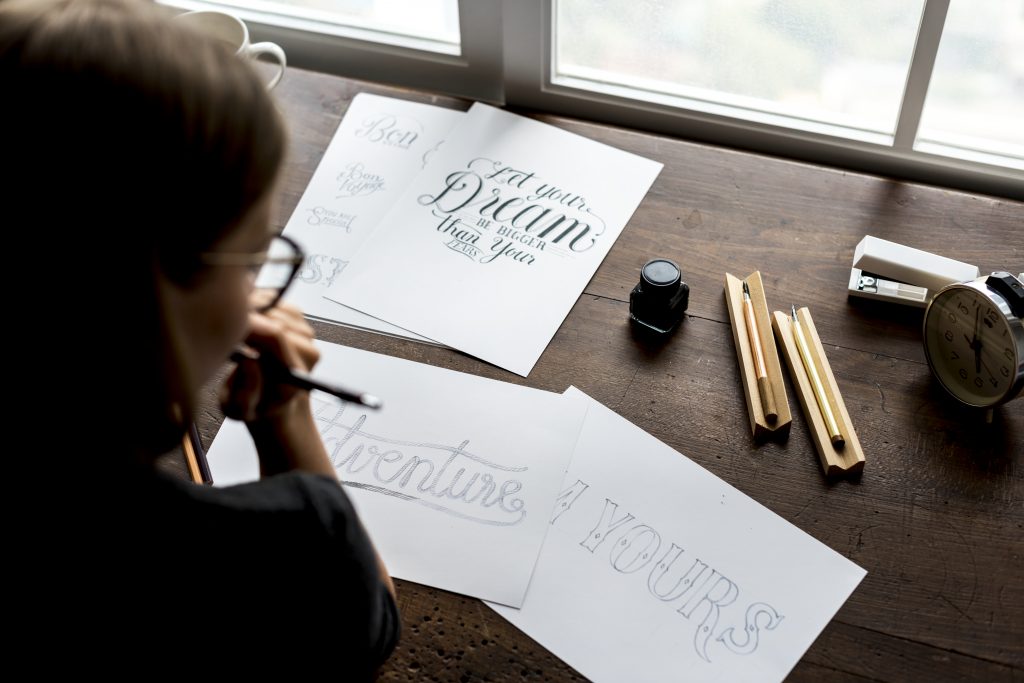 Poets believe there is beauty within the flow of words. Similarly, calligrapher’s find beauty assembling those words on paper in an artistic and beautiful fashion.  Furthermore, calligraphers design words in a harmonious, almost romantic elegance, respectively.

Calligraphy is an ancient art form that is one of the oldest forms of communication. Interestingly, calligraphy first appears as early as 200 BC in China.  Additionally, this historic art form is apparent in almost every region of the world as the main source of manuscript writing and communication.  In early findings, religious documents, such as the original Bible, are written in Biblical Hebrew calligraphy.  With western influence, calligraphy would take on a more creative point of view.

Maneuvering through the ages, calligraphy continues to maintain a unique flow of magic from pen to paper. In today’s modern world, calligraphers believe calligraphy is an interpretation of the individual.  In many aspects, each symbol creates meaning to relationships between their ancestry and language.  Furthermore, while keeping the integrity of each symbol, calligraphers allow for a harmonious flow of the entire text, as well.  Above all, a calligrapher always finds their creative rhythm and shares the individual inspiration through the flow of patterns on paper.

Calligraphy has been around for the longest time and has been a significant art form that marks essential points in history. The Chinese, the Egyptians, the Islamics, and ancient Western civilizations all have different styles formed from their cultures because calligraphy is the combination of visual art with writing. For instance, much of Western civilizations calligraphy came from its practice in Latin because of how it was taught and read in religious churches. The same goes for the Islamics, using the Koran and religious texts to create art. Because it has been around for hundreds of years, calligraphy continues to be a kind of art form that helps aid and transforms today’s media.

World Calligraphy Day allows experts and beginners to come together to discuss, practice, and learn about the art of calligraphy. This holiday began through the Pen Museum and the Manuscript Pen Company; the Pen Museum is a museum dedicated to teaching the art of calligraphy and the Manuscript Pen Company being an art retailer specializing in calligraphy products. Each year, the Pen Museum brings in experts from different schools of art and lets visitors who attend the museum to learn how to begin calligraphy and the different styles of art that exist. World Calligraphy Day celebrates this art in its history and encourages others to participate and learn about this art form.

Hashtags to use to celebrate this event
Social Media Calendar Bookmark this page so you won't miss another relevant event or holiday!
Today is July 24. I hope you have a great day and remember what John Lennon said .... life is what happens when you are busy making other plans.