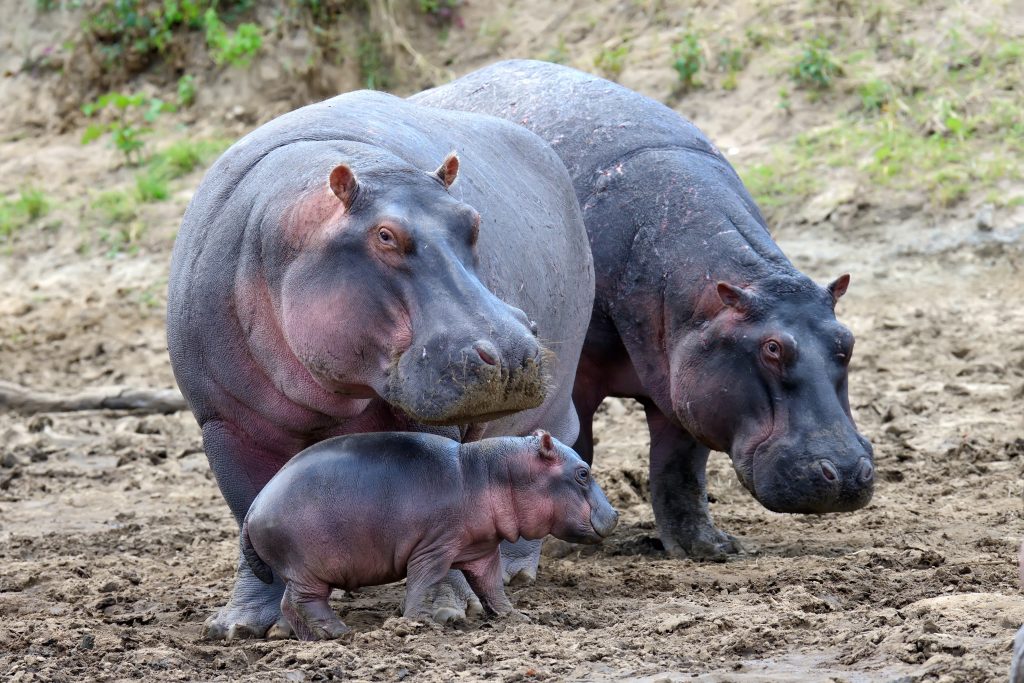 Each year, World Hippo Day on February 15th provides a special day to celebrate the world’s third-largest mammal. It’s also a day to learn more about the hippopotamus.

The blue whale and the African elephant are the only two mammals in the world that are larger than the hippopotamus. The word hippo translates to a river horse in ancient Greek. The giant animal weighs a whopping 8,000 pounds. There is only one continent in the world you can find a hippo. That continent is Africa. Hippos are native to over 30 countries in Africa. These herbivores live up to 50 years in the wild. There are only two species of hippos on the planet. These include the common hippopotamus and the pygmy hippo.

Here are some more interesting facts about the hippopotamus:

Predators of the hippo include hyenas, lions, and crocodiles. Unfortunately, humans have also become a primary predator. While some hunt hippos for their meat, others hunt them for ivory canine teeth. The demand for hippo teeth escalated after the ban on the international trade of elephant ivory in 1989. Despite recent efforts to ban the trade of hippo teeth, the animal is classified as vulnerable. Through the years, the most significant decline in the hippo population has occurred in the Democratic Republic of the Congo.

Experts believe that the modern-day hippo evolved in Africa around 8 million years ago. While they bear a resemblance to horses and pigs, these semi-aquatic mammals are in fact most closely related to whales, dolphins and porpoises – no wonder they’re so good at holding their breath underwater! These days there are only two types, the bog-standard hippopotamus and the smaller pygmy hippopotamus, but a few other now extinct species could be found across Europe and in Madagascar as little as 1,000 years ago. Hippos are now most common in countries such as Zambia and Tanzania.

In the 20th century, attempts were made to introduce hippos into the US. The “American Hippo Bill”, raised in 1910, proposed introducing hippo ranching in Louisiana, not only to help control a particular plant that was taking over the bayous but also to address the American meat crisis. However, the bill didn’t quite make it through Congress, and so hippos remained in their native Africa until the 1980s, when the infamous drug cartel leader Pablo Escobar (illegally) imported four hippos and took them to his estate in Columbia. Their numbers have increased dramatically since, perhaps to as many as 100! While the hippo has become a symbol of the area, their inability to be managed continues to cause significant issues for the local authorities.

In Africa, on the other hand, hippo numbers are sadly declining. The International Union for Conservation of Nature (IUCN) listed them as a vulnerable species in 2006 after establishing that the hippo population had declined by as much as 20% within the previous two decades. Drought has led to habitat loss, and the hunting and poaching of hippos, both for their meat and ivory teeth, is also a major threat.

Hippo Day reminds us to celebrate and value these mud-loving mammals, in the hope that they’ll be around for many more years to come.

Hippo facts: did you know…?

The word hippopotamus loosely translates as “river horse” from Ancient Greek. It’s certainly an apt name, as these creatures spend most of their lives in water, only leaving at dusk to feed on grasses. They can hold their breath for up to 5 minutes, which means they’re even able to give birth and sleep underwater. In fact, in much the same way that breathing and blinking are automatic for us humans, hippos know when to surface for oxygen subconsciously, so they come up regularly for breaths even while staying fast asleep! Although these mammals spend a considerable amount of time underwater, you may be surprised to learn that they can’t really swim! Instead, they simply walk or run along the riverbed, pushing themselves up through the water for air.

One of the main reasons hippos spend so much time submerged underwater is to prevent their skin from drying out and cracking under the hot sun. This is also why they love frolicking in mud, as the slimy substance helps keep them cool! But the hippo even goes one step further to protect itself from the sun’s rays, secreting an acidic substance that acts as natural sunscreen. This nifty protection mechanism, which turns red and then brown once exposed to the air, not only blocks ultraviolet rays but also prevents the growth of potentially harmful bacteria.

Hippos are renowned for their bulky size, with only elephants and rhinos ranking ahead of them as the largest land mammals. An adult male can reach a whopping 2,000kg and still manage to run at speeds of almost 20mph! This, combined with their aggressive nature and large canine tusks, makes hippos very dangerous animals. There are many instances of hippos attacking boats, with some people sustaining injuries or very sadly losing their lives. Great care should therefore be taken when encountering them in the wild.