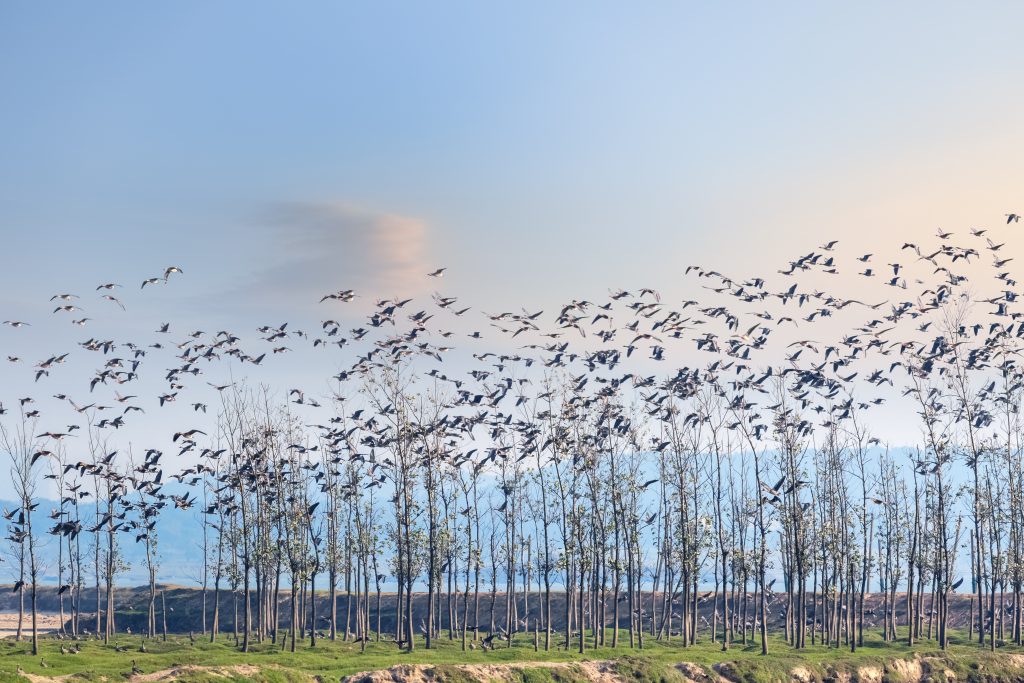 Migrating birds may fly from 15 to 600 miles or more per day during migration, depending on when they are migrating, how far they have to go, and the conditions they face along the route. While most migrating birds fly at heights lower than 2,000 feet, birds have been recorded migrating at up to 30,000 feet high, a record held by the bar-headed goose. Hawks, swifts, swallows, and waterfowl migrate primarily during the day, while many songbirds migrate at night, in part to avoid the attention of migrating predators.

“If I had to choose, I would rather have birds than airplanes.” – Charles Lindbergh

“I feel I am strange to all but the birds of America.” – John James Audubon

Since 1993, the Environment for the Americas coordinates the bi-yearly observances of World Migratory Bird Day. Dozens of organizations sponsor events including the U.S. Fish & Wildlife Service.

What can be done to prevent the problem?

Migratory birds need a network of intact habitats along their entire migration routes to survive. Increased global action through multilateral environment treaties, such as the Convention on Migratory Species and the African-Eurasian Waterbird Agreement, are essential to protect migratory birds on their international journeys. Creating protected trans-boundary habitat corridors would be of great benefit to migratory birds and other migratory wildlife, specifically at the landscape scale.

In addition, networks of critical sites key to migration need to be safeguarded and managed properly. Supporting Important Bird and Biodiversity Areas (IBAs), as described by BirdLife International, provides migratory birds with the necessary feeding, breeding, nesting and sheltering grounds that are needed during their long flights.

Ecological Connectivity and its importance

Connectivity is essential for migratory species, and important for a wide variety of ecological functions. It describes the natural and necessary movement of species and the flow of natural processes that sustain life on Earth. With 1 million species facing the risk of extinction within our generation, connectivity has become a central topic for biodiversity and sustainability. Migratory species move across the globe, running, swimming, or in the case of birds flying, connecting countries, people and continents through their migration routes. This migration can only be accomplished when animals are able to access the different sites and habitats that they rely upon along their pathways. These pathways transcend national borders, national plans and conservation priorities of any single country. Migratory birds connect countries and their conservation requires cooperation between countries and across national boundaries.

The flyways used by migratory birds connect different habitats. Often, these long-haul flight paths cross inhospitable terrains, such as deserts and open seas. Suitable habitats for wintering, as stop-over, staging and breeding sites are crucial for the survival of these birds. The ecological connectivity of these sites is important to the survival of migratory birds, but this it is being threatened by habitat loss and degradation. The loss or degradation of a critical stop-over site for migratory birds can have a devastating effect on the survival chances of migratory birds and lead to defragmentation that can have a devastating effect on populations. Other threats, such as poisoning, unsustainable use, collisions with man-made objects and climate change are also having a negative impact on migratory birds around the world.